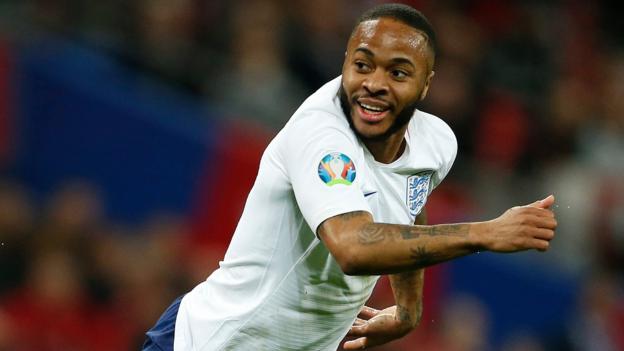 Manchester City forward Raheem Sterling is set to win his 50th cap for England in Thursday's Nations League semi-final against the Netherlands in Guimaraes.

Midfielder Jordan Henderson was the only absentee as England trained before flying to Portugal.

Matthijs de Ligt and Virgil van Dijk are in line to start for the Dutch.

Portugal and Switzerland play in Porto on Wednesday with the final and third-place play-off on Sunday.

‘When you win, you're not tired'

Netherlands manager Ronald Koeman says he expects Virgil van Dijk and Georginio Wijnaldum to both face England after chatting to them about their fitness over a coffee.

The Liverpool duo, who helped the Reds to victory in the Champions League final on Saturday, only reported for international duty on Tuesday.

“I wanted to check on their physical and mental state, and then I had a choice,” Koeman said.

“When you win, you're not tired. I've experienced that.

“Both were so confident and optimistic about the match but, if all goes well in training, I'll be lining up with my strongest team. They both belong to that XI.”

One of Koeman's first acts after being named as Netherlands manager in February 2018 was to appoint Van Dijk as his captain, as he rebuilt after failures to qualify for Euro 2016 and the 2018 World Cup.

After starting with a 1-0 loss to England in Amsterdam, the Dutch have lost just two of their 11 games since.

“That was an example for the Dutch team, how they processed the squad, gave chances to young players,” he added.

“It's not by chance they are fourth in the world rankings. That's why I spoke about Southgate doing a fantastic job. We were the lesser of the two teams when we played last time. But we're closer now, and have a better chance of winning [on Thursday].”

Another step in England's development?

While this may not be a World Cup or a European Championship, two victories would be enough to crown England as the inaugural winners of the Nations League.

It would also provide an England senior side with a first piece of major silverware since winning the World Cup in 1966.

And it represents the chance for Gareth Southgate's side to show they have matured into winners after reaching the semi-finals of the World Cup in 2018.

England eliminated their World Cup conquerors, Croatia, and Spain en route to Portugal and started their Euro 2020 qualifying campaign with thumping victories over the Czech Republic and Montenegro.

That extended their unbeaten run in European Championship and World Cup qualifiers to 41 matches since the loss to Ukraine in October 2009.

Could this be the next step in their development at tournaments?

Gracenote's forecast for the remaining four Nations League matches gives Gareth Southgate's side a slight advantage against the Netherlands in their semi-final, with a 53% chance of progressing.

However, Portugal are the overall favourites to win the competition. The hosts have a 59% chance of beating Switzerland and a 35% chance of winning Sunday's final.

Portugal play the lowest ranked of the four finalists, Switzerland, in Wednesday's semi-final with their hopes of success boosted by home advantage.