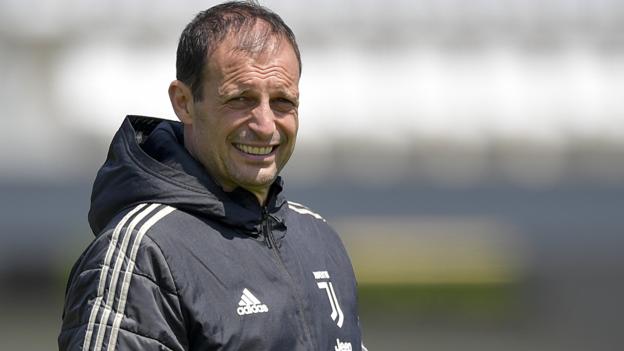 Juventus manager Massimiliano Allegri says he is “amused” at rumours he is to leave the club and says he will meet president Andrea Agnelli next week.

The Italian, 51, led Juventus to a record eighth straight Serie A in April, his fifth with the club.

Despite signing Cristiano Ronaldo last summer for £99.2m, they lost to Ajax in the Champions League quarter-finals and to Atalanta in the Coppa Italia.

“I enjoy reading and hearing everything,” said Allegri.

“It's amusing. This morning, I thought about what they might have done to me if I hadn't won any trophy in these years. But I have fun, it's part of the game and brings some bit of movement as we finished the championship a month ago.”

He added: “Next week I will meet with the president. We will be speaking in general terms, as we do every year. Before Ajax I told him I would stay.

“With the president I have an excellent relationship of mutual respect and honesty.

“I've had my ideas for six months on how to proceed. Now I'll share those ideas with the president and, together, we'll see if they work.”