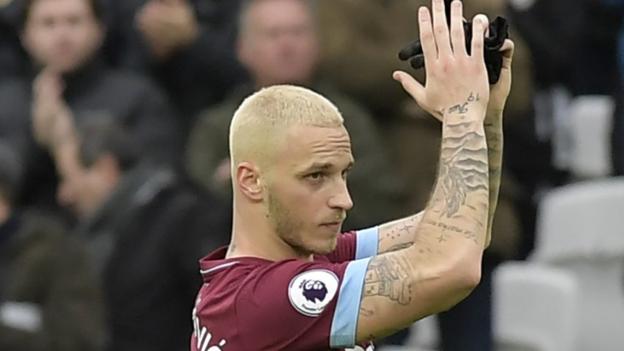 Marko Arnautovic has been left out of West Ham's squad for Saturday's Premier League match against Bournemouth.

The 29-year-old Austria forward has been the subject of a £35m bid from a club in China, and his brother has said he wants to leave.

West Ham, who are not commenting on Arnautovic's omission, have previously stated the player is not for sale.

But manager Manuel Pellegrini said on Thursday that Arnautovic could leave if it was “a good deal for both parties”.

Arnautovic, who has scored seven Premier League goals this season, started West Ham's win over Arsenal on Saturday but waved to the home crowd when he was substituted with 20 minutes to go.

He moved to London Stadium from Stoke in 2017 for a then club record £20m after handing in a transfer request at the Potters. He is under contract with the Hammers until 2022.

The 20-year-old has made 15 first-team appearances and follows defender Declan Rice in committing his future to the club.

“I am very excited to know that my future is here and excited to show the world and the fans at London Stadium what I can do,” he said.