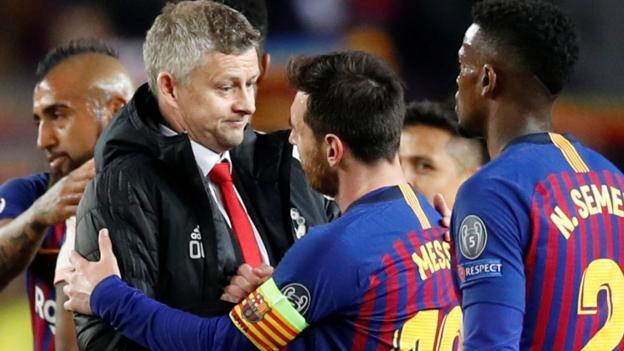 Ole Gunnar Solskjaer says Manchester United must “aspire to Barcelona's level” after the Spanish side knocked them out of the Champions League.

“If we want to get back to Man Utd's true level, true traditions, we have to challenge Barcelona,” United boss Solskjaer said.

“They were a couple of levels above over the two games.”

United struggled to contain their opponents and had just three shots on target across the two legs.

Speaking to BT Sport, Solskjaer added: “I have to say Lionel Messi is top quality and he was the difference of course. At 2-0, straight after, it was game over.

“He's different class, he and Cristiano Ronaldo are the best players of the last decade, everyone agrees on that one.

Solskjaer's side face a battle to qualify for next season's Champions League in their remaining five Premier League games.

They are sixth in the table, two points behind fourth-placed Arsenal, and travel to Everton on Sunday before hosting Manchester City on Wednesday, 24 April.

“We want to play these games again next year so we have a massive week coming up,” Solskjaer said.

“There is no point dwelling on what could have been, we have to focus on that week.”

‘The next few years will be massive for us'

United have not reached the last four of the Champions League since 2011 and were competing in the quarter-finals for the first time in five years.

Solskjaer said he knows there is “work to be done”.

“We have said all along that this isn't going to change tonight and the next few years will be massive for us to get to the level of Barcelona,” Solskjaer said.

“We have got good players and at the moment we really have done well to get to the quarters [of the Champions League] and to get in the challenge for the top four.

“We have got a rebuilding job but that starts with the coaches and the players and one or two additions to the squad will happen in the summer.”

We have shown who we are – Messi

Barcelona had lost three Champions League quarter-finals in a row, including their dramatic collapse against Roma last year, but are now into the semi-finals for the first time since they won the competition since in 2015.

Captain Messi said they have “shown who we are” with the performance.

“We put on a spectacle and played a great game,” the Argentine said.

“But we came out cold and looked nervous in the first five minutes. It was a bit weird until we regained control of the game and we scored the first goal.

“We cannot come out like that in a Champions League match because we have the experience of Rome last season and it could [have] made qualifying difficult.

“Five bad minutes can knock you out.”