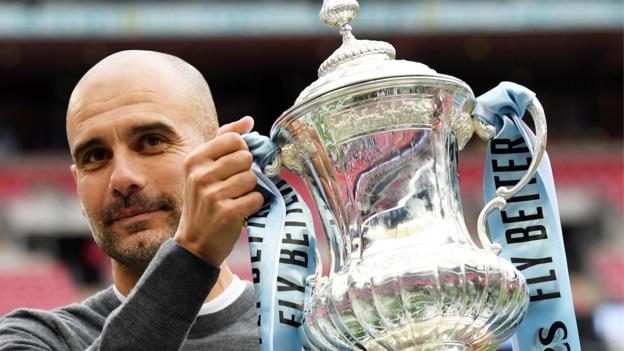 It was another glorious afternoon for Manchester City as they thrashed Watford 6-0 at Wembley to win the FA Cup and seal a historic domestic treble.

It is the biggest margin of victory in an FA Cup final for 116 years as Pep Guardiola's side continue to scale new heights in the English game.

For Watford, the FA Cup dream quickly turned into a nightmare as they were ruthlessly picked apart by the Premier League champions.

Here is what our BBC Sport pundits thought of the afternoon's drama:

‘City one of the best we've ever seen'

Former Arsenal striker Ian Wright feels City fans deserve success given the dark times they had to endure, particularly in the 1990s when they dropped down into the third tier.

“I don't begrudge City at all. Those fans know bad times,” he said. “They have been through the lower divisions. It has come full circle for them – the success and the manager of course. It is brilliant to watch.

“When you look at what they have done today to Watford, who are not a bad side… City could do that to most teams in the league. They are easily going to be one of the best teams in the Premier League for the next decade, so it is up to the likes of Liverpool to try and compete with them.”

Former England winger Chris Waddle thinks City can get even better, with this historic treble simply the start of a long era of dominance.

“Man City are just an outstanding side, probably one of the best we've ever seen,” he said. “They will just kick on and kick on. They could win the cups and league for the next five to 10 years.”

Despite being comfortably in front, Manchester City continued to pile forward in the hunt for more goals, a ruthlessness that Alan Shearer says comes from the manager.

“The most impressive thing about Man City is that when they're winning 3-0 and 4-0 they've still got the desire to keep going and keep punishing their opponents. It's almost cruel. We're running out of words to describe them,” he said.

“It comes from the manager, his hunger and desire, his will to win. He epitomises everything about this team. They've got the ability and the attitude to keep putting in these performances. They had Watford down today but they wouldn't let them get out of it. They wanted to go and get five or six – and they did.”

For Watford, their chastening afternoon was much to do with how they set up, according to Dion Dublin, who felt Javi Gracia had his side playing too deep during the first half.

“There is no way Watford could have won the game playing that way,” said the former Aston Villa striker. “You cannot just let players like Bernardo Silva have the ball. [Troy] Deeney played in a five in midfield and [Gerard] Deulofeu up top, he can't hold the ball up.

“This game was not lost with goal three or four, it was lost with the formation Watford started the game with. They never gave themselves a chance.”

Chris Waddle was also critical of Watford's approach, saying: “I'm trying to find positives for Watford but they were absolutely woeful today. They got everything wrong. On their day Watford are a very good side but they are massively inconsistent. City made them look like a pub team.”

Despite the obvious disappointment, former Tottenham midfielder Jermaine Jenas insists the Watford fans can take great pride from their team's efforts this season and believes there are plenty of reasons to be optimistic for the future.

“Watford have gone from strength to strength this season,” said Jenas. “They've found a team which has given them foundations that they can build on now. It's sad for them that it ends this way but they've had a fine season.”