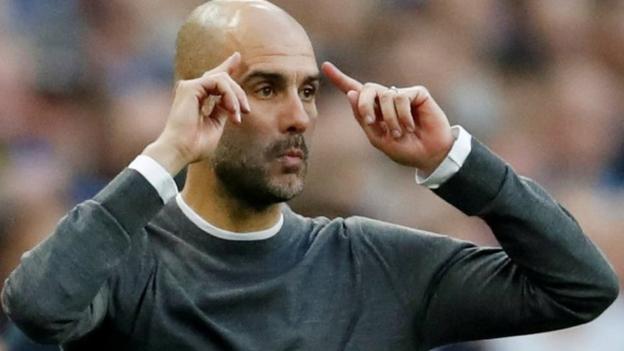 Manchester City manager Pep Guardiola hopes to strengthen in “three or four positions” in the summer.

The Premier League champions are in contention for a quadruple of trophies and Guardiola has often pointed to being satisfied with his squad options.

But on Friday he told reporters: “You know we are going to try for a holding midfielder and other positions we are thinking about.”

Guardiola, 48, also said he was keen to strengthen at left-back.

Benjamin Mendy has endured two injury-ravaged seasons since joining City from Monaco, forcing Guardiola to use Fabian Delph, Oleksandr Zinchenko or Aymeric Laporte as makeshift options in the position.

Mendy, 24, underwent knee surgery and returned from over two months out to face Burton Albion in the Carabao Cup on 23 January but has not featured since.

He has only started 16 Premier League games for City since his move in 2017.

Guardiola said: “If it happens in two seasons, it can happen in three, definitely. Hopefully not, we'll work with that, but the truth is we could use him for a few games. That is the reality.

“I don't know what's going to happen but we are thinking about the chance to find somebody in that position.

“At the end the strongest guys, every day, are there. That is the truth. That's why we are looking for next season.

“There are three or four positions I think we have to try to look for, and some ideas we have.”

‘Work to do on Gundogan future'

Guardiola has also revealed the club still have work to do to secure the long-term services of midfielder Ilkay Gundogan, 28.

The German, whose current deal expires in 2020, has started 14 league games this season but is not an automatic starter.

“”If he was 100 per cent then the deal would have been done, so we are still in negotiations,” added the former Barcelona and Bayern Munich manager.

“We try to speak with him, we want him to extend the contract right now. But if he doesn't want to, we cannot do anything else.”

Guardiola's side sit second in the Premier League – a point behind leaders Liverpool – and remain in contention for an unprecedented quadruple having lifted the Carabao Cup at Wembley following a penalty shootout victory over Chelsea last Sunday.