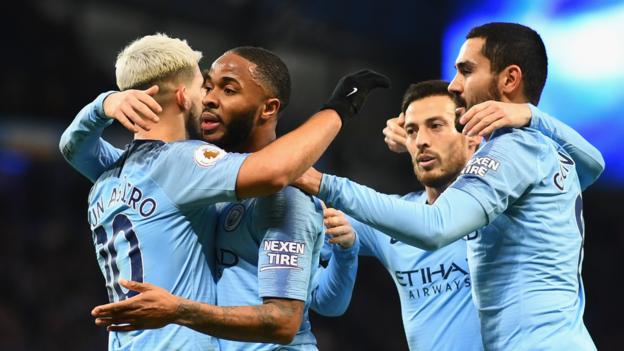 Sergio Aguero's 14th hat-trick for Manchester City closed the gap on Premier League leaders Liverpool to only two points after victory over Arsenal at Etihad Stadium.

Aguero – as he did in Tuesday's shock defeat at Newcastle United – put the reigning champions ahead inside the first minute, but Arsenal swiftly restored equality as Laurent Koscielny escaped poor marking to head home from a corner.

City's nerves were eased by a magnificent second from Aguero just before the break, rounding off a perfectly constructed move between Ilkay Gundogan and Raheem Sterling with a simple finish at the far post.

Aguero may be 30 but he shows no signs of losing any of the natural marksmanship that marks him down as world-class and one of the greatest strikers of the Premier League era.

The Argentine has now scored 157 goals in 227 appearances and he was the man Pep Guardiola was able to count on once more as Manchester City maintained the pressure on Liverpool in the title race.

Aguero's goals were all close range finishes but City could have no-one better at the sharp end of all their brilliant passing and movement and he could easily have had more.

What is often overlooked is Aguero's tireless work ethic, constantly defending from the front – one burst of energy to close down Arsenal keeper Bernd Leno and the Gunners' defence drawing warm applause from both his manager and the City supporters.

City needed to get the show back on the road after that slip on Tyneside and it was Aguero who gave them the perfect start then lifted them again after Arsenal worked their way back into the game.

The standing ovation Aguero received when he was replaced by Gabriel Jesus with 10 minutes left was richly deserved.

The further Unai Emery goes into his first season at Arsenal after succeeding Arsene Wenger, the clearer it becomes that this is a major work in progress and patience will be required.

Arsenal have sparkled at times this season, especially in home wins against Spurs and Chelsea, but it is clear they still remain way behind the big hitters at the top of the Premier League and have dropped down to sixth in the table after rejuvenated Manchester United's latest win at Leicester City.

Emery now faces a real battle to get into the top four but he still has the Europa League to aim for – a competition that was his speciality at Sevilla – as he tries to get Arsenal into the Champions League.

Matteo Guendouzi again showed his promise, especially in the first half and Lucas Torreira is a quality addition, while in attack Pierre-Emerick Aubameyang and Alexandre Lacazette are a serious threat.

Emery has also seen his defensive resources hit by long-term injuries to the likes of Rob Holding and Hector Bellerin but there is no question serious work needs to be done to strengthen Arsenal's squad.

Arsenal showed occasional flashes in the first half, but looked lightweight and impotent set against City and this was a day when the scale of Emery's task, and the time he will need to try and accomplish it, was exposed.

‘Good start to a tough week' – what the managers said

Manchester City boss Pep Guardiola: “I understand pressure, pressure to win the games. After the game in Newcastle, Liverpool were seven points ahead and now they are two.

“Of course they have to play, they have quality, but West Ham [who Liverpool face on Monday] are a good side.

“Now we have tomorrow to start again and think about Everton and after Chelsea. It is a tough week for us and we go game by game.”

Arsenal boss Unai Emery: “We are going to go game by game and thinking ‘win the next match' and maybe if we win we can take the opportunity in the near future to be near the other teams and play with this motivation.

“The difference between City and us is like this result. We need to do our work. Not a big frustration at moment, the result is the difference.

Can we play you every week? – the stats

Manchester City could be top of the Premier League table by the end of Wednesday. If Liverpool don't beat West Ham on Monday and City win at Everton two days later (19:45 GMT), there will be a new leader. Arsenal will attempt to win away from home in the top-flight for the first time since 25 November when they visit Huddersfield on Saturday (15:00).