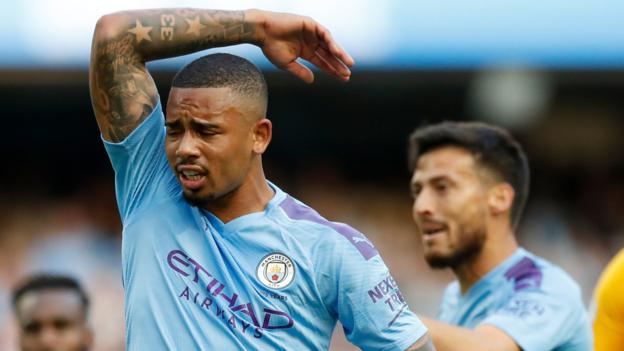 Manchester City boss Pep Guardiola said he would “have to accept it” after a VAR decision overruled what looked to have been a late winner over Tottenham.

City were celebrating after Gabriel Jesus appeared to have scored in injury time, but the goal was ruled out because the ball had brushed Aymeric Laporte's arm in the build-up.

“We have to accept it,” said Guardiola after the game ended 2-2.

“It's tough because we scored a goal late on. But ask VAR people, not me.”

Raheem Sterling had headed dominant City ahead in the first half, but Erik Lamela immediately equalised against the run of play with a strike from distance.

It was a frustrating result for City in their first home game of the season, particularly after beginning their title defence with a 5-0 win at West Ham last weekend.

It is the first time they have dropped points at home since losing to Crystal Palace on 22 December last year.

The home fans greeted the final whistle with boos directed at VAR as the disallowed goal stirred memories of City's Champions League quarter-final exit at the hands of Tottenham last season.

In April, City needed a goal to secure passage to the last four of the Champions League in their second leg encounter with Spurs at the Etihad.

The hosts thought that had arrived in injury time when Sterling struck, prompting wild celebrations from City boss Pep Guardiola.

But emotions switched instantly as the video assistant referee had the final word, ruling that Aguero was offside when Bernardo Silva diverted the ball into Sterling's path.

This time, City players wheeled away to celebrate what appeared to be a last-gasp winning goal that would have extended City's winning run at home in the Premier League to 11 games.

However, those celebrations were cut short when referee Michael Oliver indicated that a VAR review was under way, and the goal was disallowed after replays showed a ball into the box had flicked off Laporte's arm.

New handball rules introduced this season state that any goal resulting from handball, accidental or otherwise, must be ruled out and Man City found out to their cost just how strictly these laws will be applied.

Speaking on Match of the Day, Danny Murphy was scathing in his assessment of the decision.

“The new handball rule is ridiculous,” he said. “That should never on any playing field anywhere in the world be disallowed.

“It wouldn't even be seen if we didn't have VAR.”

It is the second successive City game in which VAR has played a significant role. The system also overturned a goal by Sterling in their win at West Ham last time out.

Aguero was particularly frustrated with the officials at the final whistle against Tottenham. He had also earlier exchanged angry words with Guardiola when he was substituted for Jesus, but the City boss dismissed that as a misunderstanding.

“He thought I was annoyed with him for the goal we conceded,” said Guardiola. “But it is emotions, and that is part of the game. We talked afterwards. I love him a lot because we know his feelings.”