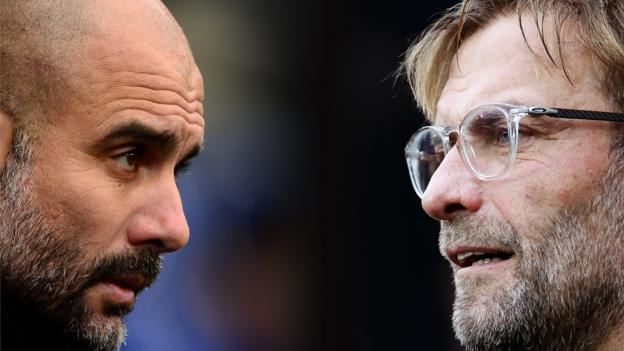 On 27 April 2014 Liverpool lost at home to Chelsea and Manchester City won at Crystal Palace on a day which turned the Premier League title race in dramatic fashion.

Liverpool, with Steven Gerrard's slip proving so crucial, were beaten 2-0 at Anfield, while City came out on top at Selhurst Park by the same scoreline before going on to win the league and deny the Reds a first title since 1990.

Had Liverpool won and City lost that day, the Reds would have been nine points clear of their rivals, who had only three games to play.

Five years on, the same two protagonists are again challenging to become champions and face the same opponents at the same venues this Sunday – only with quadruple-chasing City playing first this time around – on what could be another title-defining day.

In 2014, Liverpool's set-up included renowned sports psychiatrist Dr Steve Peters, who would go to the club once a week and attend home games to help the players deal with the pressures of their title challenge.

He says he is “watching with the eyes of somebody who is analysing to see if people are optimising their time on the pitch or allowing things to distract or displace them from what they are meant to be doing”.

So what does he make of the title race?

How do you tell whether players are feeling pressure?

City are two points behind Liverpool with a game in hand going into Sunday's fixtures and, with the pressure only set to intensify during the season run-in, what are the signs of players struggling to cope?

“From a football perspective, the most common that I found were, for example, at the beginning of a match people take some time to warm up into it,” Peters told BBC Sport.

“What some players say is you get this warm-up feeling. You want to try to over-ride that because that is psychological rather than just physical as they have already warmed up physically.

“It's also not accepting a decision by the referee when it's been made. That doesn't often help people.”

Misplaced passes, missing chances and failing to take the right option are also “the kind of thing you would question”.

In terms of coping with the pressure, Peters said there is no one-fits-all answer for players, but that, just like they would with the physical and tactical sides of the game, there should be a mental preparation.

“It's no different psychologically. You look at all eventualities and then start making plans for that which work for you so you are not caught off guard,” he said.

“For most people in sports psychology, we'd advise that you actually focus on just the process of what you are doing rather than an outcome and whether you are going to win or lose.

“That is the ideal because your maximum chance of getting somewhere is to just focus on the process and not the consequences.

Have Liverpool ‘bottled it' this season?

Liverpool held a seven-point lead over City when the two sides met in January, only to see that reduced to four with a 2-1 defeat by their rivals.

They had the chance to extend that back to seven after City suffered a surprise loss to Newcastle United, only for Jurgen Klopp's side to draw at home against Leicester City.

That was the start of a run of four draws in six games for Liverpool, which resulted in City going top and questions being asked whether the Reds were crumbling under the strain of going for a first title in 29 years.

“That is a bit rough,” said Peters. “If one of the people involved says, ‘we bottled it' then fair enough. They're saying that they lost it – ‘I lost my focus, determination, confidence' or whatever they say.

“But to actually say to somebody else, ‘this is what you were thinking', is unreasonable.

“It's acceptable to say that in sport it's a throw of the dice. There's not too much difference between many of these teams so I don't think it is helpful to go down the guilt and accusation route.”

Leading or chasing – which is better?

The lead at the top of the Premier League between Liverpool and City has changed hands 19 times this season, with the Reds having been on top for 126 days (as of 11 April) and City 109.

Also, the teams do not play at the same time again this season until the final day on 12 May, meaning one or the other will always have a chance of seizing a temporary initiative.

“Let's say you were a sportsperson who I was working with and you say, ‘when I'm in a leading position it gains confidence for me'. We would probably maximise on that but still get you to focus on process,” said Peters.

“However, you could equally say to me, ‘when I'm in a lead position I just start losing it. I start to feel uneasy and clam up because I feel like I could lose this advantage and I realise then that will put me on the back foot.'

“In an ideal situation, if you were able to channel all of your energies into what you have to do to win in any sport, then the chances will maximise – your probability is higher that you are going to win.

“Most people, when they're emotional, don't make as good a decision or a rational decision as when they are in logical mode.”

How do Man City deal with their fixture pile-up?

Manchester City are three games into an April in which they play eight matches as they challenge for an unprecedented quadruple by adding the Premier League, Champions League and FA Cup to the League Cup they have already won.

That schedule could be added to if they manage to overturn a 1-0 first-leg deficit in their Champions League quarter-final against Tottenham and reach the semi-finals.

“In any sport when you get such a run there is a risk of burning out because it just keeps coming,” said Peters.

“It's very important that you see it almost as a hurdles race where you are not meant to be clearing three or four hurdles at a time; you have got 10 to jump.”

City boss Pep Guardiola has described his team as a “machine”, which Peters said is “a perfect example”.

“It's a good way of looking at it,” Peters said. “You just expect the machine to run – just keep oiling it – rather than start to think, ‘What could happen? We might get exhausted. We might get mentally tired.'

“That's not really that helpful. It's much more helpful to have a positive outlook, say this is the plan and follow the plan.”

The impact of late goals

Liverpool have scored 15 goals in the final 10 minutes of league matches this season. That converts to earning them seven extra points, as opposed to City's nine goals, resulting in no extra points.

According to Peters, late goals can have a demoralising effect if the outcome you built up to does not materialise.

“You go through effectively a mini grief reaction because what you have really done is set yourself up for this,” he said.

“You have an expectation, which is realistic and reasonable, that you are going to gain these points; they're going to not get the points. You've made all that up, but actually it's a bit premature.

“You've jumped ahead of yourself because you are saying ‘if this happens', and then when it doesn't happen. Like anything in life, if it doesn't go the way we want it to, you go through disappointment.

“You react to it emotionally, which is pretty healthy and natural, and then you have to say, ‘let's work through those emotions and process them'.

“It's the same as when we didn't win the league with Liverpool. It was a gutting experience because you built up all season and there was an anticipation that it could happen.

“You are always going to form expectations, and that means when they don't come to fruition you go through a disappointment. You just have to get over it, regroup and get on again.”