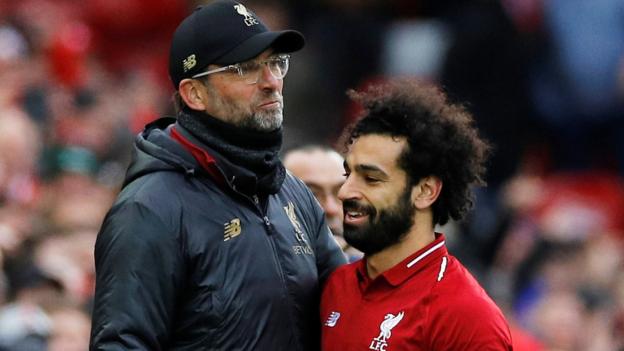 Jurgen Klopp says Mohamed Salah “has made a big step this season” after his double against Huddersfield lifted him into pole position for the Golden Boot.

Salah won the award with 32 goals last season but Klopp believes “it is a bigger achievement” for the Egyptian to be leading the way again.

“It's such an important year for him after a campaign where every shot was a goal last season,” Klopp told the BBC.

“He is being really assessed by people to see if it was a one off.”

Salah's 21st league goal of the campaign saw him take the record for the most goals scored (69) by a Liverpool player in his first 100 games for the club.

The Egyptian also moved ahead of team-mate Sadio Mane – who also scored twice against the Terriers – in the race for the Golden Boot when he slid his second goal past Jonas Lossl late on.

“He looked like he wanted to break that record tonight because after the second goal it was like ‘me against the rest of the world',” added Klopp.

“Thankfully all of the others are doing that as well and that is why we are in the situation we are in.”

Victory for Liverpool saw them move back to the top of the Premier League on 91 points, with a two-point advantage over Manchester City, although the defending champions have one game in hand.

“We have to do our job and win the games,” Klopp told Sky Sports. “To have 91 points is incredible and we should mark that day because it doesn't happen every year.

“The boys have done everything possible to give ourselves a chance.”

Firmino expected to be fit to face Barcelona

Roberto Firmino missed Friday's victory over Huddersfield with a muscle tear in his thigh, but Klopp says the striker “is likely to be fit” for their trip to Barcelona.

The Reds face the La Liga leaders in the first leg of their Champions League semi-final on Wednesday and the German was quick to dismiss social media rumours which suggested the Brazilian may miss the rest of the season.

“Do not believe 3% of what is on social media,” said Klopp.

“Roberto Firmino is not out for the rest of the season. After training he felt it a little bit and this morning he still felt it. It's a small tear but it's Bobby and he is a machine.”

Asked whether he has a plan for Barca talisman Lionel Messi, Klopp said he “had not thought about Barcelona for a second””.

“So many tried there [to win in Barcelona] and it's not likely that it will happen for us there but it is possible. From Saturday morning I will think about them intensively and we will have a plan for sure.”