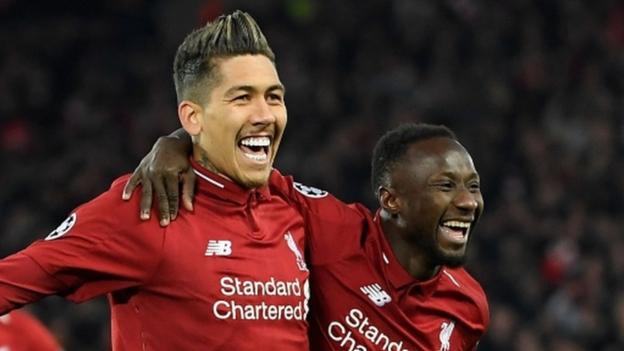 Liverpool took command of their Champions League quarter-final with Porto thanks to two first-half goals in the first leg at Anfield.

Naby Keita put Liverpool in front in just the fifth minute when his shot from the edge of the penalty area deflected in off Oliver Torres.

Porto did create chances but striker Moussa Marega failed to convert meaning his side leave Merseyside without what could have been a crucial away goal.

Liverpool goalkeeper Alisson produced an excellent block with his feet to deny him in the 30th minute and moments later the Mali international failed to connect fully with a volley from eight yards.

Maraga had two further chances in the second half but Alisson was first able to comfortably save at his near post and later watch on as the Porto striker blazed over the bar.

There was another nervous first-half moment for Liverpool when Alisson tipped away a deflected cross with the ball deflecting on to Alexander-Arnold's arm. The incident was checked by VAR but the referee awarded a corner rather than a penalty.

Mohamed Salah could have been sent off late on for a high tackle with his studs on to Danilo Pereira's shin but after another VAR review no foul was given.

Liverpool failed to find a third goal which would have made them even more comfortable but they will head to Portugal for the second leg on 17 April as strong favourites to reach the semi-finals for the second-successive year.

Liverpool thrashed Porto 5-0 in their last-16 first leg in last season's Champions League en route to the final meaning the tie was all-but over going into the second leg.

This was a far more even contest with Liverpool not hitting top form in attack and as a result the tie remains alive, if tilted strongly in the Reds' favour.

They were comfortable for much of the first 70 minutes but tensions grew late on when a Porto away goal would have put the tie in the balance.

Liverpool will be grateful that Maraga spurned four chances although the hosts could have scored more goals of their own in the first half.

Salah ran on to a loose back pass but slid his shot wide of Iker Casillas' post when one-on-one and Firmino put a half-volley over the bar from Henderson's cross.

With a crucial Premier League home game against Chelsea coming on Sunday, Klopp felt comfortable enough to replace both Firmino and Sadio Mane in the second half.

Porto are certain to show greater attacking intent at home, where they have won all four of their Champions League matches this season, but Liverpool will know that an away goal would put them in a commanding position.

Klopp has frequently rotated his midfield three this season and it is still unclear which central midfielders would play in his first-choice XI.

On Tuesday his plans were disrupted with Georginio Wijnaldum only on the bench following a recent injury worry and James Milner forced to fill in at left-back with Andrew Robertson suspended.

That meant Keita kept his place in midfield, starting alongside Fabinho and Henderson.

He scored his first goal for the club as they beat Southampton on Friday and followed that with another to open the scoring against Porto, albeit with the help of a large deflection.

The Guinea midfielder was lively while Fabinho was composed at the base of midfield and effectively broke up Porto attacks.

With the Brazilian playing deep, Henderson was again freed to get forward and he thrived as the pick of the Reds' midfield.

He played a number of excellent passes, notably the one in the build-up of Firmino's goal which perfectly split the Porto full-back and left centre-back, his chipped ball which gave Firmino another chance later in the half and a further whipped cross that found Mane in the second half and would have resulted in a goal but for a tight offside decision.