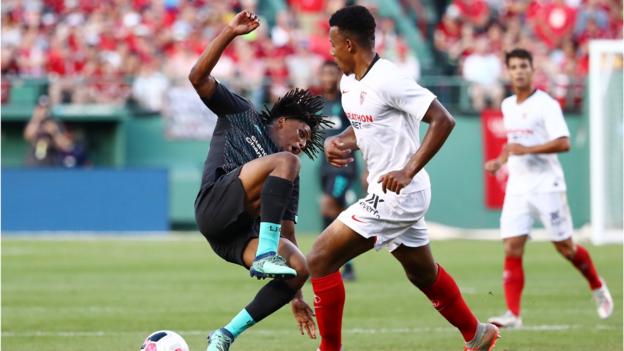 Sevilla were annoyed that Larouci played on when one of their players was down, but there can be no excuse for Gnagon's frustrated kick, which launched 18-year-old Larouci into the air and led to him being carried off on a stretcher.

“It is much too early in the season to create headlines by saying the things I think about the situation,” Klopp said after the game, which Liverpool lost 2-1.

The German manager was watching his words, but midfielder James Milner described the challenge – for which Gnagon has apologised – as a “disgrace”.

“Was it too much? I thought so, yes,” Milner told LFCTV.

“We know it's only a friendly, but you don't see many red cards in friendlies, do you? You don't normally see too many tackles like that.”

Sevilla midfielder Ever Banega could also have been sent off in the first half of a feisty friendly for catching Harry Wilson with an elbow.

Liverpool fielded a whole new XI after the break, with the predictable impact on the flow of the game – but after Gnagon's dismissal, the La Liga side still found a late winner through substitute Alejandro Pozo.

‘He hit him full throttle'

On another brutally hot evening on the east coast of the United States – with temperatures at 34C at kick-off – Klopp ended a fiery first half by exchanging words with Sevilla's former Spain boss Julen Lopetegui.

Banega had already gone in hard on at least one occasion when he brought the opening period to an end by flattening Wilson with the second of two swinging arms. He would surely have seen red as well on another night.

There were more spiky challenges from both sides in a 15-minute spell at the end of the first half, before Gnagon swiped into the shins of Larouci, who later got on the team bus using crutches and with a brace on his leg.

“It looks like Larouci was lucky but we have to wait. He hit him full throttle. Harry got a knock on his cheekbone and his eye so that was not too cool,” Klopp added.

“In general, I don't like overly hard games. The challenge is there to win the ball, that's the only reason. There are rules. I don't want to say anything specific about this game because there will be headlines. I want to have a holiday in Spain again.”

‘I apologise for an odious act'

Klopp said that there was no need for Sevilla to apologise, but after the game Gnagon did just that, calling his challenge “an odious act”, while the La Liga side tweeted that they wish Larouci “a full and fast recovery”.

Lopetegui said “it was possibly a red card”, adding that his 22-year-old French defender was “very worried because he knows it is a bad tackle and not a good decision”.

Klopp insisted he “hates losing”, even in a friendly where he was still without his first-choice front three and goalkeeper, among “seven or eight” missing personnel.

The European champions had started the game well, with right-back Trent Alexander-Arnold marking his first start of pre-season by creating a chance for Ben Woodburn, while Origi had an effort well saved by former Fulham keeper Sergio Rico.

Andy Lonergan, a 35-year-old goalkeeper who most recently turned out for Rochdale against Scunthorpe in front of 3,361 people, then saved brilliantly from De Jong before Origi blasted in from a corner to level.

The game appeared to be petering out into a draw when Pozo kept his feet well to dance around second-half keeper Simon Mignolet and slot home the winner for the 10 men.

Liverpool head to New York and another tough game against Sporting Lisbon on Wednesday, and face Manchester City in the Community Shield in 13 days' time.

“I can blame nobody for our opponents because I planned the pre-season,” Klopp said.

“It's pretty rare that we play the best football on the first matchday, but we want results – and that is what we are working on.”