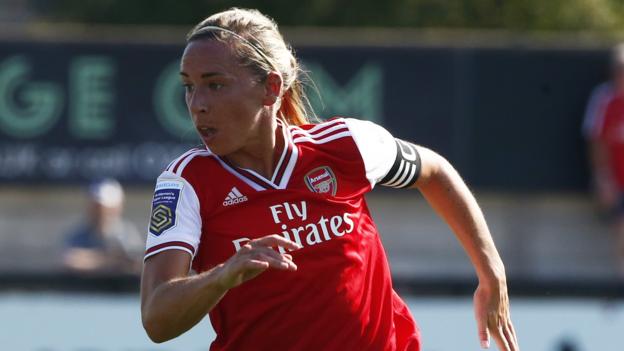 England and Arsenal midfielder Jordan Nobbs says she has put the heartache of suffering a serious knee injury “in the past” before the new WSL season.

Nobbs, 26, was forced to miss this summer's World Cup after rupturing her anterior cruciate ligament in November.

She scored with her first shot in a pre-season win over Tottenham.

“I've put that in the past. I'm in a great place. These next few weeks are going to be tough accepting that it's still a long-term injury that you can't just rush back into [playing from].

“Nothing is the same as match fitness but Arsenal have got me into a place where mentally I feel great.”

Arsenal host West Ham in their first Women's Super League game of the season at Boreham Wood on Sunday.

Nobbs, who was taken off on a stretcher in the win at Everton nine months ago, admitted she will have to “build up” to a return to the England set-up after missing recent friendlies against Belgium and Norway.

“[England manager Phil Neville] spoke to me about the last camp but with my timeline, international football is different to club football. That's another process we have to build up to,” said Nobbs.

“We want to get me into the next camp if possible but he has to do the right thing with his squad and I have to keep working hard on the pitch to get into the best shape possible.

“It's still a building block right now but I want to get back into the team as soon as possible and hopefully he [Neville] wants me there too.”

BBC Sport has launched #ChangeTheGame this summer to showcase female athletes in a way they never have been before. Through more live women's sport available to watch across the BBC this summer, complemented by our journalism, we are aiming to turn up the volume on women's sport and alter perceptions. Find out more here.