Home Football How Heckingbottom has revitalised Hibs with wily defence and shrewd attack
1.

How Heckingbottom has revitalised Hibs with wily defence and shrewd attack 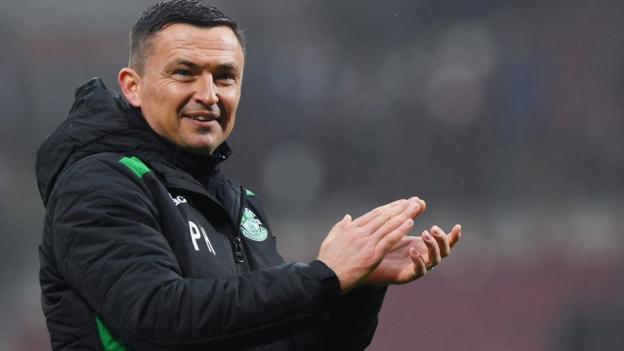 Six wins and two draws. Not a single league defeat. From eighth place to fifth in the Scottish Premiership after a thunderous Edinburgh derby triumph that powered his team above their city rivals.

Paul Heckingbottom's appointment as Hibernian head coach drew little fanfare. He was largely unknown in Scotland, reports suggested he was not the club's first-choice candidate and, in Neil Lennon, he was following a boss with a colossal profile who had delivered an exhilarating and highly successful reign.

Yet, with “Hecky at the wheel”, as the Hibs fans are fond of singing, the team are flying. A season in grave danger of petering out with a bottom-six finish now has a grandstand finale.

Saturday's gripping derby victory was Hibs' first over Hearts at Tynecastle since May 2013. They're now two points above their city foes and only six adrift of Kilmarnock and Aberdeen in third and fourth place as the post-split fixtures commence.

Heckingbottom was named top-flight manager of the month for March and his only defeat in nine matches at the helm was a Scottish Cup quarter-final loss to treble-chasing Celtic.

So how has the Premiership's newest boss brought about such emphatic improvement? Here are the numbers behind Hibs' meteoric rise.

Improvements in both boxes

Hibs look like a team that know how to win, a side capable of evolving and adapting to whatever their opponents launch at them.

Heckingbottom has made telling tactical changes during games to keep the unbeaten league run alive, switching things up with his team on the back foot at home to Rangers, recovering from a goal down to draw, and at Tynecastle, where they came from behind to win.

The former Barnsley boss has restyled Hibs' tactics and made them far more effective at getting results in the bag.

Before he arrived in Edinburgh, Hibs were scoring on average 1.36 goals per league game. Since Heckingbottom took charge, that figure has improved by 37% to 1.88 goals per game.

Deploying a vastly experienced back four of captain David Gray, Darren McGregor, Paul Hanlon and Lewis Stevenson, the new boss has laid a solid defensive foundation. That's all the more impressive given Hibs were shorn of their form centre-backs in January, with Efe Ambrose leaving the club and injured Ryan Porteous ruled out for the rest of the season.

Pre-Heckingbottom, Hibs conceded an average of 1.12 goals per league match. Now that number has dropped by over a third to just 0.75 goals per game.

Naturally, scoring more goals and conceding fewer has yielded more wins. Under Lennon, the side averaged around 1.36 points per league game. Under Heckingbottom? They're sitting on an excellent 1.88 points per match.

To give that figure some context, had Hibs spent the entire league season playing at their current level, they'd now be sitting on 62 points – only four behind Rangers in third.

Working on the individual

Heckingbottom has not had the opportunity to make sweeping personnel changes given he arrived after the January transfer window had shut and inherited a squad besieged by injuries.

What he has done so well is wring every last drop out of the players he has. Where Lennon struggled to get his top players to hit their best form this term, Heckingbottom has made subtle tweaks and increased confidence.

It's been evolution, not revolution.

Since Heckingbottom's first match, Stevie Mallan has scored two goals and picked up a further three assists – the latest of which teed up Daryl Horgan for the Tynecastle winner.

Mallan played under Heckingbottom at Barnsley last season but struggled to break into the starting XI. But, where the midfielder was once a source of frustration for Hibs fans, he has proved a vital component of the team's recent success.

Florian Kamberi was publicly lambasted by Lennon shortly before his departure, but the Swiss has been reinvigorated, even when deployed high and wide on the left rather than his primary position up front. Kamberi has scored three goals and contributed an assist in the nine games played under Heckingbottom.

The loan signing of Marc McNulty between Lennon's mysterious exit and Heckingbottom's appointment was a huge boost. The striker has scored six goals (albeit three came from the penalty spot) and provided four assists.

Horgan has delivered quiet consistency on the wing and Stephane Omeonga has emerged as a creative force in midfield with defensive snarl to match.

Stick those four in front of a solid defence, with the added protection of Mark Milligan in a holding role, and it's easy to see why Hibs are hitting form.

ST: “I've been very impressed with Heckingbottom. Saturday was the cherry on the top, but he's had nine games, six wins and playing a good style of football.

“And he's brought a confidence to that Hibernian side. Exciting times for the Hibernian fans. Not just for the rest of this season but also for next season as well.”

MS: “It's well-documented that Hibs have not had a great record at Tynecastle, so for him to go there on his first derby game and get a victory, and do it in a well-structured way, speaks volumes of the job that he has done there so far.”