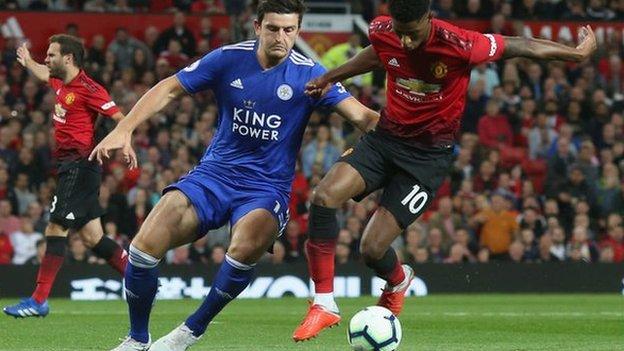 Five years ago Harry Maguire was playing League One football. Now he is on the verge of becoming the world's most expensive defender.

Manchester United are set to complete the £80m signing of the 26-year-old Leicester and England player, but is he worth the money?

BBC Sport takes a look at the stats and the story behind the player.

‘A student of the game always destined for the top'

Think of the best players in the world and you will think of those who excel in all the attributes needed for their position on the pitch – Cristiano Ronaldo and Lionel Messi are nigh-on perfect forwards while Kevin de Bruyne's skills, goals and passing ability make him a world-class midfielder.

Maguire, however, is not the best of the best in all areas of his game. His lack of pace is an obvious factor and something that has previously put off other clubs – Huddersfield once turned down the chance to sign him for £1m because he was deemed to be too slow.

But Maguire makes up for that deficiency with his reading of the game.

“He was terrific, he was very studious, and wanted to learn. He's a student of the game and takes information on board very quickly, particularly at the training ground.”

Maguire was given his first professional start by Adams in the Championship at the age of 18, but his leadership qualities and football brain were evident long before then.

Former Sheffield United academy director Travis Binnion worked with Maguire from when he was 16 and remembers a player who possessed a confidence and maturity beyond his years.

“He would want to be the best in training and always wanted to do that bit more,” he said.

“He never got done for pace, he was always smart. He was always very confident and felt he belonged at any level. I am not surprised to see him go to the very top.”

It was while at Sheffield United's academy that he faced an opponent who could soon become a team-mate – Paul Pogba.

The two players were on opposite sides for the 2011 FA Youth Cup final, Maguire playing for the Blades and Pogba for Manchester United. Although Sheffield United lost, Maguire stood out against a team that also included Jesse Lingard and Ravel Morrison.

According to reports, then Manchester United manager Sir Alex Ferguson was watching the game and called Maguire afterwards, telling him he had all the ingredients to make it to the very top.

Maguire had to wait a little while for a move to the Premier League, with Hull City signing him in 2014. Prior to that he spent three seasons in League One with Sheffield United. Despite that league not being famed for cultured defenders playing out from the back, Maguire never altered the playing style that ultimately caught the eye of Manchester United.

“What makes him an £80m player is his distribution,” Michael Dawson, who played alongside Maguire at Hull City, told BBC Radio 5 Live.

“He can bring the ball out from the back, he is comfortable in tight areas. He gets out of trouble and that is what makes him an elite player.”

Is he better than Man Utd have already?

Manchester United have been missing a dominant force at the back for years, arguably since Nemanja Vidic departed five years ago.

On average, he won an aerial battle once every 22 minutes for Leicester last term, better than both Lindelof and Jones (37 and 27 minutes respectively) and significantly better than Bailly (49 minutes). Smalling, though, won aerial duels slightly more regularly – once every 20 minutes last term.

How does he compare to Europe's best?

For the money they have spent, United will believe they have signed a defender who can stand alongside Europe's elite, so how do his stats compare to some of the best centre-backs across the continent?

In general, as the table below shows, Maguire is comparable in all areas, with the added bonus of being one of the most aerially dominant.

Since 2016 he has directly contributed to 13 goals for Leicester – seven goals and six assists. Of the players below, only Sergio Ramos (17) has managed more.

So… worth the money?

Maguire may not be the complete defender but he appears to be player that possesses the attributes United need – aerial prowess and an ability to play out confidently.

The pressure of the price tag is another obstacle the England international will have to overcome but it is a pressure he has been backed to thrive on.

“He is one of those lads who will walk into the dressing room and settle in straight away,” added Dawson.

“One day you can see him being a captain of Manchester United. Give him time to settle in, and I am sure he will be a captain of that club one day.”