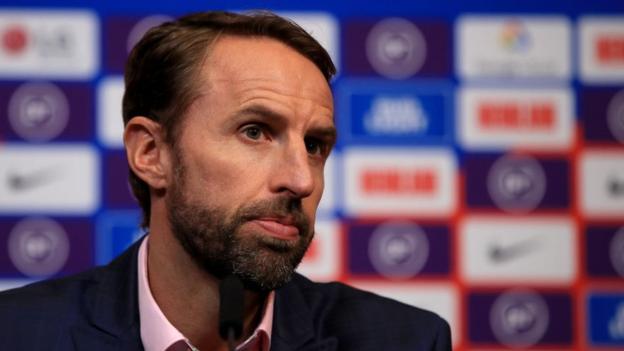 Southgate's first football match as a fan was at Gigg Lane when he lived in the town as a boy.

“The first game I went to was Bury against Watford. Derek Spence scored the winner, so it sticks in your mind,” said Southgate, 48.

Bury were expelled from League One on 27 August following the collapse of a takeover bid.

“My first thoughts are with people who have lost their jobs because of the human element. It's a tragic story,” Southgate added.

“It worries me, and I think it could be something we see a bit more frequently.

“It's like any other business that goes under, that's a massive blow for the families.

“Players at that level have much more financial difficulty than players in the leagues above.”

Southgate admits he “didn't watch” much of his first match as he was “running up and down the terraces” with his dad “clipping him around the ear” for not paying attention to the game.

Fans turned up at Gigg Lane in their hundreds on Saturday when their team should have been taking on Doncaster.

Southgate, who is preparing to take charge of England for two Euro 2020 qualifiers against Bulgaria and Kosovo in September, said it is a club's “responsibility” to manage its finances.

“The decision-making as a club has not been the right thing,” the former England defender added, also addressing the near collapse of Bolton Wanderers, who were saved by a last-ditch takeover on 28 August.

“What is clear to me is that, in a 92-team pyramid – and professional teams at non-league level as well – there are so many clubs in deficit and in debt.

“That can't be sustainable, so that has to be addressed.

“I understand the desire for people to risk to progress and there's examples where that has worked.

“I think clubs have to think seriously about their model. Young players coming through give an opportunity to clubs to have a sustainable model and use the talent that I believe exists in our country.”