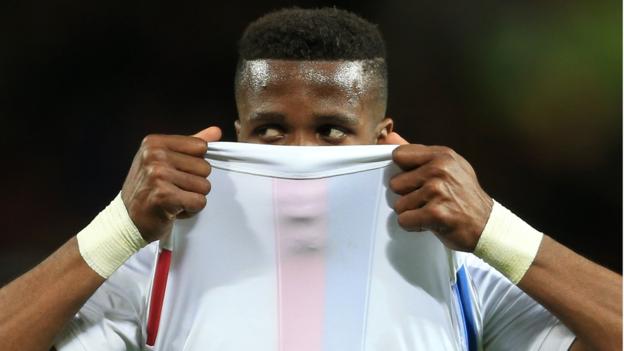 Crystal Palace forward Wilfried Zaha has told the club he wants to leave this summer in search of Champions League football and the Eagles could demand £80m for the 26-year-old Ivory Coast international. (Mail)

Juventus have begun negotiations with Manchester United for Chile international forward Alexis Sanchez, 30, who has also been linked with Inter Milan.(Independent)

Chelsea are not planning to extend Gonzalo Higuain's loan and will send the 31-year-old striker back to Juventus after the Europa League final. (Mail)

Chelsea manager Maurizio Sarri still fears a Stamford Bridge exit even if he wins the Europa League – but Roma and AC Milan could be interested in the Italian, while the Blues may turn to Watford boss Javi Gracia. (Express)

Chelsea will leave a decision on Sarri's future as head coach until after the Europa League final against Arsenal on 29 May. (Telegraph)

West Brom will hold talks with former Brighton boss Chris Hughton next week as they bid to persuade him to make a swift return to management. (Telegraph)

Tottenham have blocked all first-team transfer talk until after the Champions League Final on 1 June. (London Evening Standard)

However, Tottenham are among the clubs monitoring developments with Bayer Leverkusen's 23-year-old Germany international midfielder Julian Brandt, who is understood to have a £21.5m release clause for this summer. (Mail)

Jose Mourinho claims a ‘nice guy' manager can end up becoming a ‘puppet' in an apparent message to his Manchester United successor Ole Gunnar Solskjaer. (Talksport)

Real Madrid will release up to 14 players this summer, with former Tottenham forward Gareth Bale, 29, Costa Rica goalkeeper Keylor Navas, 32, and Colombia international forward James Rodriguez, 27, likely to be among them. (Marca)

Griezmann will not replace former Liverpool playmaker Philippe Coutinho at Barcelona, according to the 26-year-old Brazilian midfielder's agent. (Sky Sports)

Who are the big six seeking this summer?

Chelsea striker Tammy Abraham, 21, linked with a permanent move to loan club Aston Villa, is a target for Bundesliga side RB Leipzig.(Sun)

QPR boss Mark Warburton says he does not regard Luke Freeman's departure from QPR as inevitable. Freeman, 27, has been linked with Middlesbrough and Sheffield United. (West London Sport)

Former Chelsea midfielder John Obi Mikel, 32, is closing in on a return to the Premier League and is reportedly considering multiple offers. (ESPN)

Brazilian winger Kenedy, 23, on loan this season at Newcastle, has returned to Chelsea to face an uncertain future, with the Blues set to offer him out for sale this summer. (Newcastle Chronicle)

The FA Cup is set to be broadcast exclusively on free-to-air television for an extended period for the first time since the late 1980s, with ITV close to joining the BBC as rights holders. (Times)

Wolves have unveiled images of a revamped Molineux for the future, including a single-tier South Bank, as well as revamped Steve Bull and Billy Wright stands. (Express and Star)