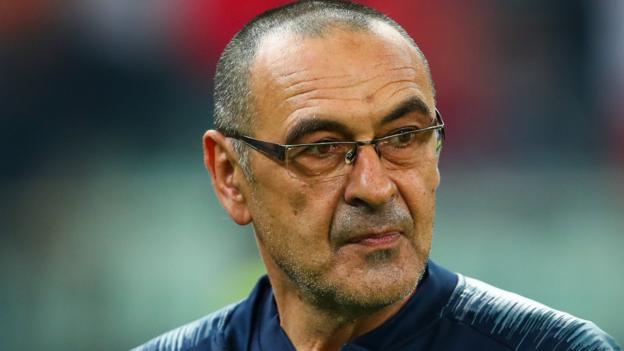 Chelsea manager Maurizio Sarri has agreed to become Juventus' new head coach and has asked Chelsea to release him from his contract. (Goal)

Sarri informed Marina Granovskaia of his decision in a meeting on Friday and the Blues director promised to discuss his future with club owner Roman Abramovich. (Sky Italy – in Italian)

Chelsea are awaiting a formal approach from the Italian champions, who will have to buy out the final year of the Italian's £5m-a-season contract. (Guardian)

Authorities in Baku ordered the turnstiles to be opened to the public during the first half of the Europa League final between Arsenal and Chelsea because they were embarrassed by the thousands of empty seats. (Times – subscription required)

Barcelona are willing to sell Brazil forward Philippe Coutinho, 26, if interested clubs such as Manchester United or Chelsea put in a big enough bid for him. (Star)

Manchester United are set to bid over £100m for Benfica and Portugal under-21 striker Joao Felix, 19. (Correio de Man via Mirror)

Will Liverpool win a sixth European Cup or will Tottenham get their hands on the trophy for the first time?

West Ham striker Javier Hernandez, 31, is set for a move to Valencia, with the La Liga outfit keen to bring in the Mexican for £8m. (Sun)

Ajax's Dutch defender Matthijs de Ligt, 19, will give Manchester United a decision over a potential move to Old Trafford in the coming days. (Telegraph)

Ilkay Gundogan will stay at Manchester City next season even if it means the Germany midfielder, 28, leaves for free when his contract expires next summer. (Mail)

Real are set to hold talks with Chelsea to negotiate a deal for Hazard. (Mail)

Arsenal and Leicester are monitoring Valencia's 19-year-old Spanish winger Ferran Torres, who could be available for around £25m. (Mail)

Liverpool's Senegal forward Sadio Mane, 27, says he was on the verge of joining Manchester United after speaking to manager Louis Van Gaal, before a phone call from Jurgen Klopp changed his mind. (Mirror)

The Gunners have contacted Leicester over a potential move for the Foxes' 22-year-old England midfielder James Maddison but have been quoted £60m. (Mail)

Barcelona are among a number of clubs interested in Girona's 32-year-old Uruguay forward Cristhian Stuani, formerly of Middlesbrough. (Marca)

Barcelona's Dutch goalkeeper Jasper Cillessen, 30, has criticised the club for putting a £53million price tag on him amid interest from Manchester United and Benfica. (Mail)

Villa are close to agreeing a deal with Birmingham City for Spain midfielder Jota, 27. (Express and Star)