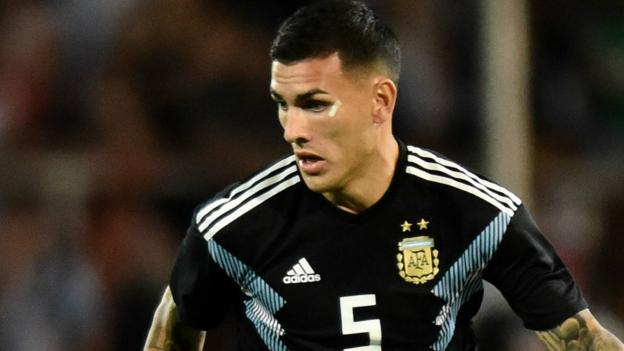 English midfielder Callum Hudson-Odoi, 18, is willing to see out the remaining 18 months of his contract at Chelsea to push through a move to Bayern Munich. (Talksport)

Wolves open talks with Sparta Prague over £11m-rated Ghanaian striker Benjamin Tetteh, who has been likened in style to Didier Drogba. The 6ft 4ins forward, 21, has already attracted a £7m bid from Galatasaray. (Mail)

Manchester United manager Ole Gunnar Solskjaer hopes a Premier League club will snap up former Red Devils striker Giuseppe Rossi, 31. The former Italy international is a free agent and has been training with United in a bid to recover from a knee injury. (Evening Standard)

Team-mate Jesse Lingard wants Spain goalkeeper David de Gea, 28, to stay at Manchester United as talks continue to extend his current deal at Old Trafford, which runs out in 2020. (Mirror)

Espanyol's Spanish striker Borja Iglesias, 25, has refused to discuss a move to Everton as the Merseyside club prepare to match his £25m release clause. (Marca – in Spanish)

Has Coutinho failed to live up to expectations at Barcelona?

Bournemouth are willing to sell England striker Callum Wilson to Chelsea for £75m – 25 times the amount they paid for the 26-year-old in 2014. (Star)

Wolves will rival the Blues for the signature of Wilson, who has scored 10 goals so far this season. (Birmingham Mail)

Tottenham's new stadium will not be finished this season. (Mail)

Spurs and Spain striker Fernando Llorente, 33, is a target for Barcelona. (Mundo Deportivo – in Spanish)

Guardiola also fears City will lose out to Barcelona in the race to sign Ajax's 21-year-old Netherlands midfielder Frenkie de Jong, who is also a target for Paris St-Germain. (Telegraph)

Wolves are set to open talks over an improved contract for 25-year-old defender Conor Coady, whose form could see him in contention for a place in the England squad. (Telegraph)

Everton are interested in signing Lyon midfielder Tanguy Ndombele but will have to pay £75m for the 22-year-old France international. (Star)

Barcelona manager Ernesto Valverde says Chelsea and Spain striker Alvaro Morata, 26, is a “great player” and that the La Liga club “have a space” in their squad. (Sun)

Watford's French midfielder Abdoulaye Doucoure, 26, has told a French TV station he “is going to leave” the Hornets. (Canal Football Club, via Express)

West Ham captain Mark Noble can understand why 29-year-old Austria forward Marko Arnautovic wants to leave the Hammers for China because the money “is a different kettle of fish”. (Times – subscription required)

Former Liverpool winger Ryan Babel, 32, is close to moving to Fulham on loan. The Netherlands international plays for Turkish side Besiktas. (De Telegraaf – in Dutch)

Lille have entered the race to sign West Ham midfielder Pedro Obiang, 26. The Guinea international is also a target for Italian side Fiorentina. (RMC Sport – in French)

Bournemouth will offer Wales midfielder David Brooks, 21, a new deal in order to fend off interest from Manchester United and Tottenham. (Sun)

Fulham, Huddersfield and Leeds are among the clubs interested in Columbus Crew and USA forward Gyasi Zardes, 27. (Teamtalk)

Leeds also want to complete the signing of Southampton goalkeeper Fraser Forster, 30, by next weekend. (Star)

Manchester United want Netherlands defender Timothy Fosu-Mensah to stay on loan at Fulham but the Cottagers want the 21-year-old to leave in order to bring in more loan signings. (Sun)