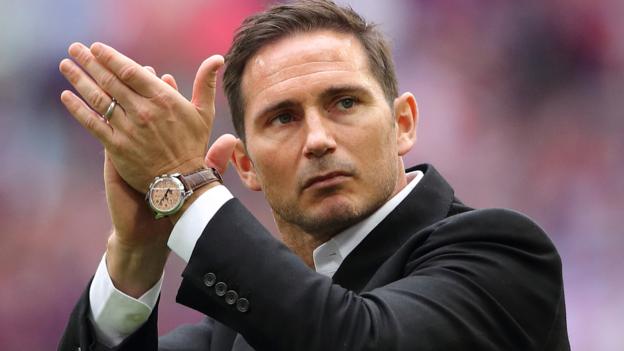 Crystal Palace's £50m-rated England Under-21 defender Aaron Wan-Bissaka, 21, would favour a move to Manchester United, but is not pushing to leave the Eagles. (Sky Sports)

Tottenham have ruled out a move for Sporting Lisbon's Portugal midfielder Bruno Fernandes, 24, who has been linked with Manchester United. (Mail)

Manchester United believe they can win the race to sign Leicester defender Harry Maguire because of Manchester City's reluctance to pay in excess of £80m for the 26-year-old England international. (Mail)

Chelsea's Brazil midfielder Willian, 30, is on the brink of signing a two-year deal to stay at Stamford Bridge. (Sun)

Manchester United are ready to make David de Gea, 28, an improved offer in a bid to keep him at Old Trafford beyond June 2020. (ESPN)

Ajax will seek just over £30m for their Morocco winger Hakim Ziyech this summer. The 26-year-old has been linked with Liverpool and Arsenal. (Mirror)

Manchester United are favourites to sign Argentina international Giovani Lo Celso, 23, but Real Betis have put a £67m asking price on their midfielder, who has also been linked with Tottenham. (inews)

Fulham's Serbia striker Aleksandar Mitrovic, who has been linked with West Ham, is on the verge of a move to Real Betis. (Star)

Why Sarri is leaving with reputation intact

A review of Maurizio Sarri's season at Chelsea

Liverpool and Bosnia defender Dejan Lovren, 29, could be set for a move to AC Milan with his agent flying to meet with the Serie A side. (Star)

Arsenal are planning to offer Gabon striker Pierre-Emerick Aubameyang, 29, a huge new contract as they aim to ward off interest from the Chinese Super League. (Mirror)

Leeds will reject any interest from Tottenham in 18-year-old forward Jack Clarke and from Aston Villa for 23-year-old midfielder Kalvin Phillips. (Star)

The brother and agent of former Chelsea forward Gonzalo Higuain has appeared to end speculation linking the former Argentina international with a move to Roma by saying the 31-year-old wants to end his career at Juventus. (Mirror)

Lazio have valued Albania goalkeeper Thomas Strakosha at 50m euros (£44.5m) The 24-year-old has been linked with both Arsenal and Tottenham. (Il Messaggero, via Football.London)

United want the English youngster in time for him to join the squad on their pre-season tour to Australia on July 7. (Star)

Brighton are in talks with Genk over a deal for the Belgian club's captain and winger Leandro Trossard, 24. (Sky Sports)

River Plate midfielder Santiago Sosa, 20, linked with a £13 move to Everton, could be granted an EU passport through his European ancestry, which would increase his chances of a move to the Premier League this summer. (Liverpool Echo)

Arsenal are preparing an offer for highly-rated Flamengo midfielder Reinier Jesus, 17, a Brazil Under-17 international. (Tuttomercatoweb, via Talksport)

Coventry are keen to sign Wolves striker Bright Enobakhare on a permanent basis, having had the 21-year-old Nigerian on loan last season, but the Premier League club are not expected to sell this summer. (Express and Star)

Former Arsenal midfielder Edu, 41, currently the national team co-ordinator at the Brazilian football federation, is on the brink of a return to the club as technical director. (Football.London)

Leicester are yet to agree a fee with Luton for defender James Justin, 21, but remain confident of striking a deal for the 21-year-old. (Leicester Mercury)

Ajax defender Matthijs de Ligt's girlfriend and her mother have been spotted searching for property in Paris. The 19-year-old Netherlands international has been linked with Paris St-Germain. (De Telegraaf, via AS)

Newcastle's Spanish midfielder Ayoze Perez, 25, has urged the club's hierarchy to allow the Magpies to fulfil their potential and “play for something bigger” in the future. (Newcastle Chronicle)

Tottenham are spending £1m on upgrading their players' lounge at the new stadium – only two months after opening. (Sun)