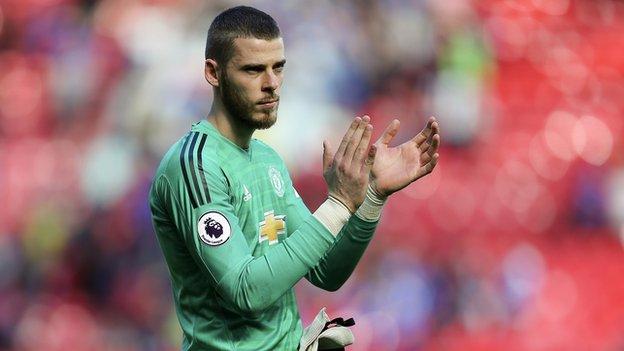 Manchester United will give Spain goalkeeper David de Gea £20m if the 28-year-old leaves for Paris St-Germain this summer. (Sun)

United have had a £40m bid for England Under-21 defender Aaron Wan-Bissaka, 21, rejected by Crystal Palace. The Eagles want closer to £60m. (Sky Sports)

Benfica president Luis Filipe Vieira has conceded that Joao Felix, 19, could leave the club this summer amid strong interest in the midfielder from Manchester United. (Metro)

Manchester City have offered Felix a contract worth £26m. (Record – via Mail)

Manchester City midfielder David Silva, 33, will get a testimonial match at Etihad Stadium next year. The Spain playmaker's contract expires next year and he wants to end his career at Las Palmas in his native Gran Canaria. (Sun)

Tottenham will bid for Fulham and England Under-21 winger Ryan Sessegnon, 19, this summer. (Football.London)

Third in the Nations League…

Are England shaping up as Euro 2020 contenders?

Chelsea have revived their interest in Bayer Leverkusen and Jamaica winger Leon Bailey, 21, but must wait to see if their transfer ban is overturned before making a move. (Mail)

Manchester United have begun drawing up a list of potential replacements for Paul Pogba, 26. Tottenham's Christian Eriksen, 27, and Monaco's Youri Tielemans, 22, are being eyed to fill the void if the France midfielder leaves. (Standard)

Arsenal are interested in Fiorentina's Jordan Veretout, 26, but the former France Under-21 midfielder is already in talks with Napoli. (L'Equipe – in French)

Newcastle and Southampton have made bids for Mainz and France Under-21 striker Jean-Philippe Mateta, 21. (L'Equipe, via Sport Witness)

Arsenal want to sign Saint Etienne's French defender William Saliba, 18, but the Ligue 1 side would want to loan him back next season. (Football.London)

Stoke want £23m if they are to sell England goalkeeper Jack Butland, 26. (Sun)

Ajax and Netherlands defender Matthijs de Ligt, 19, says Cristiano Ronaldo asked him if he would join Juventus next season following Portugal's Nations League victory over the Dutch. (NOS – via Goal.com)

‘We should have done better'

Fulham and Serbia striker Aleksandar Mitrovic, 24, is a target for West Ham. (Mail)

West Ham are prepared to do battle with Arsenal and Tottenham for the signature of Atalanta and Ivory Coast midfielder Franck Kessie. The 22-year-old has been on loan at AC Milan since 2017. (Express)

Leeds have made approaches to Liverpool over wingers Harry Wilson and Ryan Kent, both 22. (Football Insider)