Home Football FA Cup: Five fifth-round ties to look out for this weekend
1.

FA Cup: Five fifth-round ties to look out for this weekend 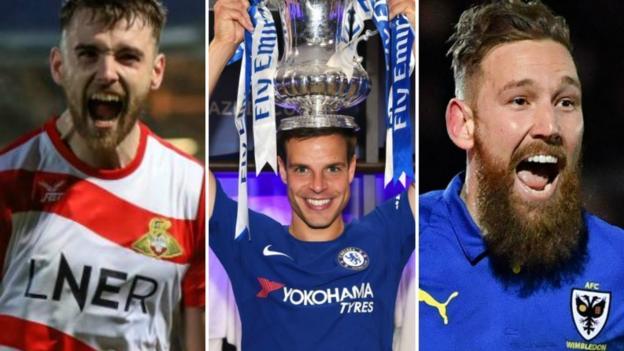 It's FA Cup fifth-round weekend, with all eight ties played to a finish on the day after replays were abolished to ease fixture congestion.

A competition which started with 736 clubs is down to the last 16 – with Newport County the lowest-ranked team standing.

The League Two club host Pep Guardiola's Manchester City, who are chasing a quadruple, at a sold-out Rodney Parade.

Meanwhile, holders Chelsea host Manchester United in a repeat of the 2018 final, with the tie being broadcast live on BBC One on Monday (19:30 GMT).

BBC Sport takes a look at five of this weekend's ties.

AFC Wimbledon v Millwall: Poor in the league – great in the cup

There will be at least two non-Premier League clubs in Monday's quarter-final draw, which is live on BBC One from 19:00 GMT.

That is because Swansea City entertain Brentford in an all-Championship tie on Sunday (16:00 GMT), while League One AFC Wimbledon host second-tier Millwall.

Wimbledon might be bottom of League One but they have already upset West Ham United, and boss Wally Downes is eyeing another famous win against a team where he started his coaching career.

“I was speaking to ‘Bomber' [Millwall boss Neil Harris] before the draw and we both said, ‘blimey, we don't want each other', but that's the way it's turned out,” said Downes.

“It's a local derby and it should be a great day. On the day, anything can happen.”

Millwall, 20th in the Championship, also claimed a Premier League scalp in the last round after Everton crumbled at The Den.

Wimbledon have yet to fall behind in this season's FA Cup, while Millwall's previous three victories in the competition have seen them concede the first goal.

This is what the FA Cup is all about.

Newport, 15th in League Two, are at home to Manchester City, who are chasing a Premier League, Champions League, FA Cup and Carabao Cup quadruple.

Cup fever has gripped the South Wales city, with Newport fans queuing through the early hours to get a ticket for the sell-out at Rodney Parade, which is also home to two rugby union clubs.

In the past 13 months in the FA Cup, Newport have knocked out Premier League Leicester City, taken Tottenham to a Wembley replay, and beaten Championship clubs Leeds United and Middlesbrough.

Will Newport add City – beaten by then-League One Wigan at the same stage in last season's competition – to an impressive list of giant-killing feats?

City arrive for the tie on the back of a 6-0 hammering of Chelsea, and Guardiola's side have won their two FA Cup games this season by an aggregate score of 12-0.

However, there is a glimmer of hope for Newport.

City have won just one of their past six FA Cup away games against sides from a lower division.

In the past 18 months, Watford, Stoke City, Crystal Palace, Manchester United and Huddersfield Town have all lost to the Robins in knockout competitions.

Now Lee Johnson's side have their eyes set on upsetting Wolves, the ‘best of the rest' in the Premier League table behind the ‘big six'.

The Championship hosts are looking to reach the quarter-finals for the first time since 1974 and they go into the tie on the back of nine successive league and cup wins.

“With Manchester United and Chelsea playing each other, many teams will fancy their chances of progressing into the next round,” said Robins boss Johnson.

It's 16 years since Wolves last reached the quarter-finals.

But with just seven Premier League clubs left – and at least one more about to fall – could Nuno Espirito Santo take the Black Country club all the way to the final?

This is League One Doncaster's first appearance in the fifth round of the FA Cup since 1956.

And locals can smell an upset against a Crystal Palace side who sit three points above the Premier League's relegation zone.

Doncaster are sixth in the third tier and, under Grant McCann, are enjoying a fine run of form.

In 2019 alone, they have won five out of eight league and cup games, including a 3-1 success at Championship Preston in the third round.

Former Millwall striker John Marquis has scored 22 goals this season, including three in the FA Cup.

Roy Hodgson's priority is keeping Palace in the Premier League, yet there are many who would like to see the former England boss walk out at a Wembley on 18 May, three months before his 72nd birthday.

Palace have won just two games in the competition since reaching the final in 2016, but one of those was an impressive victory over Tottenham in the last round.

Will the final fifth round tie be the best?

On paper, Chelsea at home to Manchester United has the potential to be a cracker.

The hosts' inconsistencies are frustrating their manager Maurizio Sarri but they did respond to last weekend's 6-0 thrashing at Manchester City by winning their Europa League tie in Malmo in Thursday.

United have had a brilliant start under caretaker manager Ole Gunnar Solskjaer but it will be interesting to see how they deal with the midweek defeat by Paris St-Germain in the Champions League.

Despite winning the FA Cup last season, Antonio Conte was sacked by Chelsea and his successor Sarri is already feeling the heat after last week's capitulation at Etihad Stadium.

Jesse Lingard and Anthony Martial both scored when United beat Arsenal in the fourth round.

However, both are struggling to be fit after suffering injuries in Solskjaer's first defeat as caretaker manager.

“We have to think about the FA Cup against Chelsea and keep our place in the top four,” said United's Spanish midfielder Ander Herrera.