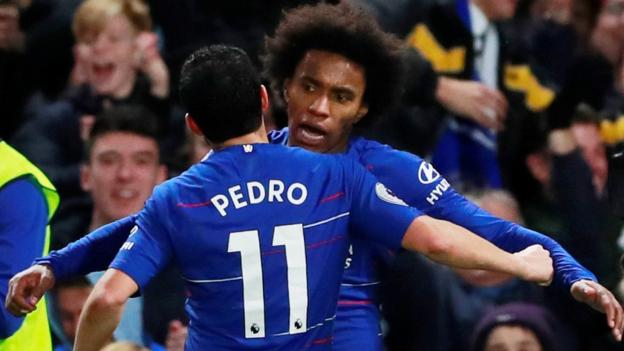 Chelsea manager Maurizio Sarri said “very important” Willian “has to stay” with the club after the winger scored a spectacular goal to give the Blues a win over Newcastle.

Willian curled the ball past Martin Dubravka in the 57th minute after Ciaran Clark's header had cancelled out Pedro's opener.

Earlier this week, the Blues reportedly rejected a player-plus-cash bid from Barcelona for the 30-year-old Brazilian in a deal that would have also seen Barca winger Malcom move to Stamford Bridge.

“For us Willian is really a very important player,” said Sarri. “We need wingers, so we need Pedro, we need (Callum Hudson-) Odoi, we need Willian of course.

“In this moment, he's a fundamental player – he has to stay with us.”

Willian joined Chelsea from Russian side Anzhi Makhachkala in a £30m deal in August 2013 and has helped the Blues win the Premier League twice, the FA Cup and the League Cup.

When asked about the transfer speculation, he replied: “My future is here at Chelsea, I don't know what you're talking about.”

Chelsea are now fourth, one point behind third-placed Tottenham, but six points clear of Arsenal, who they face at Emirates Stadium in their next game on 19 January, while the Magpies have dropped into the relegation zone.

Sarri's side do enough for the three points

Chelsea had failed to score in their previous two league matches at Stamford Bridge – a 1-0 loss to Leicester and a goalless draw with Southampton – but they netted in the ninth minute when Pedro collected David Luiz's ball over the top, took a touch, then shot past Dubravka for his seventh goal of the season.

However, with Eden Hazard again featuring as a ‘false nine' with Olivier Giroud on the bench and Alvaro Morata left out of the squad, they struggled to create further clear-cut chances before Clark equalised, powerfully heading in from Matt Ritchie's corner.

There were boos heard inside Stamford Bridge at half-time, but Sarri's side were greatly improved in the second half, with Hazard a much more prominent threat.

The Belgian led Chelsea's attack, which resulted in their second goal as he ran at the Newcastle defence, offloaded to Willian who, from a tight angle, cut inside onto his right foot and curled a beautiful effort past Dubravka with the ball going in off the post.

With nine minutes left, 18-year-old Callum Hudson-Odoi, the subject of a £35m bid from German champions Bayern Munich, came on for only his second Premier League appearance.

The home fans chanted “we want you to stay” in the direction of the talented winger, who was part of England's Under-17 World Cup triumph in 2017 and has 18 months left on his current Chelsea deal.

Newcastle drop into the bottom three

Newcastle started the day 15th in the Premier League, but wins for Burnley and Southampton – along with Cardiff drawing – leaves Rafael Benitez's side in the bottom three.

Benitez won the manager of the month award in November, but since then United have only won one match in 10 in all competitions.

With the Spaniard unlikely to be given any money to make further signings – amid ongoing uncertainty about a possible takeover – there are real concerns that the club could drop into the second tier after only two seasons back in the top flight.

Before the game, Benitez said that the club's “reality” was “having to compete in a division when we cannot compete against Bournemouth, who are spending money”.

At Stamford Bridge, Newcastle had late chances to snatch a point, but Ritchie shot over the bar and Salomon Rondon headed a chance wide.

Newcastle face a hugely important home game against Cardiff in their next league match, before tough assignments against Manchester City and Tottenham.

Man of the match – Pedro (Chelsea)

Another Newcastle failure against a top-six side – the stats

Chelsea boss Maurizio Sarri speaking to BBC Sport: “Today was very important to get points. We started well but after the goal we slept for 20 minutes, so by the end of the first half we were in trouble.

“We were better in the second half. I'm very happy with the result but we need to improve mentally and technically because we lost a lot of the ball in a stupid way.

“I think our wingers attacked the space better than in the last five or six matches but we need to attack the box better.”

Newcastle manager Rafael Benitez speaking to BBC Sport: “We conceded a goal we could avoid but after that we were fighting for every ball. These players care, you could see that.

“We scored and then controlled the last few minutes of the first half so it's a pity, but a piece of quality made the difference.

“You could see a lot of positives with the performance but no points. We knew that they would keep the ball and we had to maximise what we did when we got the ball. We had some chances on the counter but our final pass wasn't there.”

Newcastle play their FA Cup third-round replay against Championship side Blackburn on Tuesday, 15 January (19:45 GMT), before returning to league action on Saturday when they host Cardiff City (15:00 GMT)