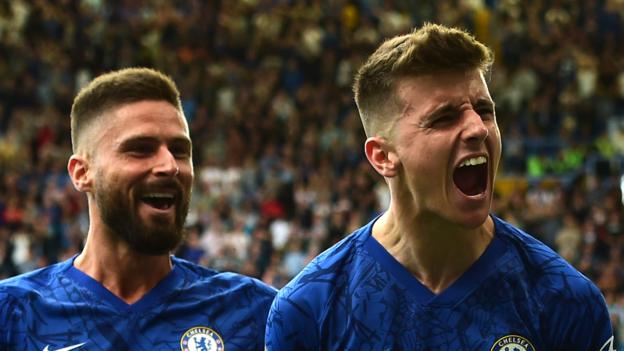 Chelsea legend Frank Lampard was back at Stamford Bridge on Sunday – this time as manager – and although his side were unable to hang on for victory there was much to be impressed by.

Lampard has been entrusted with finally bringing through some of the club's fleet of young talent and in the first half against Leicester we got a glimpse of what could lie ahead for Blues fans.

Yes, Leicester were impressive in the second half and deserved a point as Lampard's side again faded, but there were enough positive signs to suggest that Chelsea are heading down the right path under their record goalscorer.

A calculated decision to bring youngsters in

It's easy to forget that Chelsea finished third last season, such was the unrest under now Juventus manager Maurizio Sarri at times.

But Lampard has not been handed an easy job. The club are serving a transfer ban and lost their best player during the summer, with Eden Hazard moving to Real Madrid for a fee that could reach £150m.

To counter that, Lampard has made a calculated decision to bring youngsters in to his side this season and we are starting to see his philosophy on the pitch. Mason Mount and Christian Pulisic started at Stamford Bridge while Tammy Abraham was introduced from the bench.

With England internationals Ruben Loftus-Cheek and Callum Hudson-Odoi still to come back from injury as well, there is the backbone of a young, energetic side ready to emerge.

A draw against Leicester means that Lampard is the first Chelsea manager to fail to win any of his first three games in charge since Rafael Benitez in 2012-13, but Chelsea played well for long periods against Manchester United and Liverpool and but for a bit of luck he could have already won a trophy.

There is already evidence of a progressive style and you can see an improvement in the team. Lampard is in at the right time for Chelsea. Everything he does is for the club.

Against Leicester, in the first half in particular, Chelsea were first to everything and pressed with such intensity as they made the most of the energy a young team gives you. You can see a growth in Chelsea in a short time and, while they have faded in all three games so far, I have not seen anything to worry me.

It's certainly far too early in a season to compare Lampard's Chelsea to the team under Sarri last year, and we will learn more as the team adapt to his patterns and behaviours. All they are lacking so far – and it's a big all – is an ability to close a game off and win.

Mount was rested for the European game against Liverpool in midweek but the 20-year-old was back in the starting XI and, in putting the Blues ahead after seven minutes, he became the first English player to score for Chelsea under an English manager since Dennis Wise in May 1996.

Lampard, of course, knows Mount well after having the midfielder with him at Derby County last season, where he scored 11 times and played well enough to win a full England call-up from Gareth Southgate.

He is making the step up to the Premier League, which is massive, but he has one huge advantage – a manager who believes in him.

I can relate to just how crucial that is. I was 24 when I left Millwall in the Championship to play under David Moyes at Everton and I knew that he trusted me to make an impact and would stand by me and give me time. That's a huge boost for a player and Lampard is already seeing what Mount can offer at this level.

Mount was excellent on Sunday, having more shots (five) and shots on target (three) than any other player on the pitch, while his passing accuracy in the opponents' half of 90.5% was also the best on display.

In the top flight, playing for a big club, the major difference for any player is being clinical. That will define Mount as a player. When I look at a young player coming into a side I think, ‘can you put yourself in good positions?'

You don't always expect a young player to score every time, but the time to worry is when they don't get into the positions to score. Against Leicester in the first half Mount certainly showed that this won't be an issue.

He had already gone close with a shot straight at Kasper Schmeichel when he showed great desire to close Wilfred Ndidi down on the edge of his own area, drive on and score. I like the way he took the shot so early, not giving Schmeichel a chance to get set.

He could have had a second goal with a header which was too close to Schmeichel but again, he was in the right position.

Mount was the closest central midfielder to the striker but he's not a number 10 – he showed other sides to his game too such as when he galloped back into his own penalty area to clear a dangerous James Maddison cross in the second half as Leicester looked to build pressure.

It's very early days but if he plays like this he will play a lot for Chelsea – Lampard trusts him.

Giroud to be a key man?

He's won 90 caps for France and a World Cup, but Olivier Giroud had only started 13 Premier League games for Chelsea in 18 months before Sunday's game.

He's a clever player who gives those playing behind him space and he showed on Sunday that he will be integral to how Chelsea look to play under Lampard. He's such an unselfish player who loves to pin centre-backs and bring others into play and from the start he was heavily involved.

The game was just 48 seconds old when the Frenchman chested a ball into the path of Pedro, who volleyed into the side-netting. Giroud then helped fashion a chance for Mount and pulled off a superb backheel to find N'Golo Kante, who was denied a goal against his old club.

Giroud always had a runner looking to get in behind and stretch Leicester, whether that be Pedro, Mount or Pulisic, all of whom impressed in the first period. That front four were almost on a string at times, pressing in a wave and moving fluently across the pitch.

Can Abraham step up?

I was impressed with Chelsea and Lampard for the first hour but the game changed when he replaced Giroud with Abraham in the 61st minute.

It left too many inexperienced players together at the top of the pitch and the change felt pre-planned. Leicester were just starting to apply pressure and Lampard may have felt that he needed to freshen things up at the hour mark but I would have liked the change to have been delayed until the storm had been weathered.

The team was feeding off of Giroud and his experience could have been key to Chelsea keeping hold of the ball better to control the game.

Abraham is a different sort of striker. The 21-year-old is clearly talented – he has scored 48 goals in 78 games in two loan spells in the Championship – but at this moment in time Chelsea may play better without him.

It's early days but he doesn't suit the system Chelsea were playing. Giroud is often fairly static and a focal point for Chelsea's attacks while Abraham is always on the move.

Chelsea looked like a team in the first hour who had trained for this game with Giroud up front. He triggered their pressing and was at the heart of their good play, and they lost their way as the game wore on, with Leicester having 11 attempts on goal after the break.

Next up for Lampard and Chelsea come games against two newly-promoted sides in Norwich and Sheffield United. A first win may not be far away.