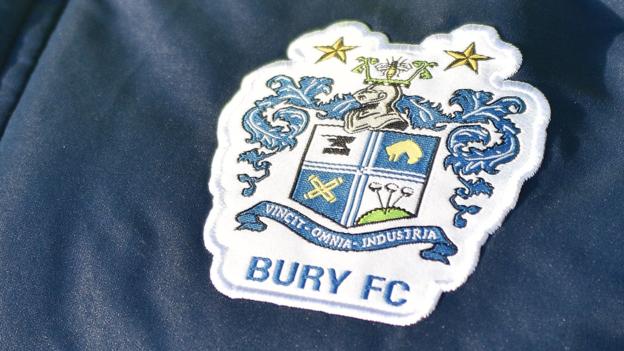 Bury are “confident” of remaining in the English Football League despite being threatened with expulsion over their ongoing financial problems.

The League One club have been given until 23 August to show the EFL their plan to pay off outstanding creditors.

Bury's first three games have all been suspended because they have so far not provided “the clarity required”.

“If we stand united we can get through this difficult spell for our historic club,” Bury said in a statement.

“In the last six months, we have come a long way together.

“Once we have supplied the EFL with the recently requested additional information, we are confident that our embargo will be lifted. In anticipation of this, we would expect that the EFL will not remove us from the Football League.

“A lot of people are working very hard to get this over the line. As a club, we would like to thank the players who are currently training at Carrington with a view to signing for our brilliant football club.

“Thank you for standing by us, even though the situation we find ourselves in is very difficult.

“There is a lot of uncertainty in the Football League with other clubs outside Bury. Everyone at the club wishes them all the best with their own circumstances.”

The EFL have said they would continue to work “constructively with the club” to obtain the details required to avoid calling off further fixtures.

The Shakers have already been given a 12-point deduction for the season after entering into a company voluntary arrangement, which is classed as an insolvency event by the EFL – to try to clear some of their debts.

Bury, who won promotion from League Two last season, had a winding-up petition against them dismissed by the High Court on 31 July.