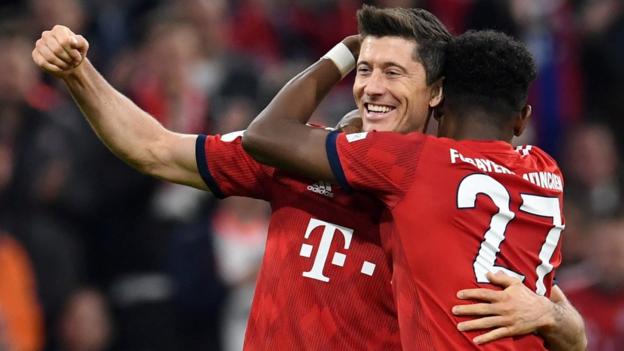 The Bundesliga title race has come down to the final day for the first time in almost a decade, with Bayern Munich needing a point against Eintracht Frankfurt to see off the challenge of Borussia Dortmund.

Dortmund must beat Borussia Monchengladbach and hope Bayern lose at home – both matches are on Saturday at 14:30 BST.

Lucien Favre's Dortmund had led by nine points in December but were overtaken last month with a 5-0 defeat at Bayern.

Dortmund were breathtaking for large spells of the season, with England forward Jadon Sancho one of their main stars. But a run of one win in five games in February and start of March, and the 6 April thrashing at the Allianz Arena, have quite possibly cost them the title.

Favre managed Hertha Berlin, Borussia Monchengladbach and Nice before joining Dortmund last summer, but all his major trophies have come in the Swiss league and cup.

“I think people are a little disappointed Favre wasn't able to get this through and maybe doesn't have the mentality you needed in a title race,” German football writer Raphael Honigstein said on the BBC Radio 5 Live Football Daily.

“That's always been the accusation against him. He's a wonderful technical manager who improves players, who sees the game in a way most people don't – but when it comes to the mentality, that fighting spirit, the never-say-die attitude, it's not him.”

Both teams have only won once in their past three games, with Bayern missing the chance to wrap up the title last weekend.

Bayern are aiming to win the league for a record seventh year in a row, with Dortmund the last team to finish above them in 2012, when they were led by Liverpool boss Jurgen Klopp. Bayern's narrowest winning margin in the past six years was 10 points.

Under Jupp Heynckes, they finished 21 points clear of second-placed Schalke – and 29 above Dortmund – in fourth last season.

“For a team with 55 points last year to finish with 76 possibly is an amazing achievement,” said Honigstein, referring to Favre's side.

But he added there is disappointment “because they had that big lead – and there was a sense that Bayern, for this season only perhaps, are voluble enough to give you a chance because next year they will spend big money on new players”.

Bayern's squad this season is an ageing one, with 35-year-old Arjen Robben, fellow forward Franck Ribery, 36, and defender Rafinha, 33, all leaving at the end of the season. In Kovac, they have a manager whose only trophy was against Bayern – in last season's German Cup final for Frankfurt.

The last time the title realistically went down to the final day – excluding 2009-10 when a 17 swing in goal difference was needed – was 2008-09, when Wolfsburg finished two points clear of Bayern.

Bayern boss Kovac left Saturday's opponents Frankfurt last summer for the club he used to play for, but his job is still in doubt even if they win the domestic double. They play RB Leipzig next Saturday in the German Cup final.

“It depends who you ask at Bayern,” said Honigstein. “Half the board are looking for a new manager and the other half are hoping Kovac works out.”

Both title chasers' opponents are battling for Champions League spots. Gladbach are fourth, narrowly above Bayer Leverkusen on goal difference, with Frankfurt another two points behind them.

There will be full live text coverage of the final day of the Bundesliga on the BBC Sport website and app (14:30 BST).