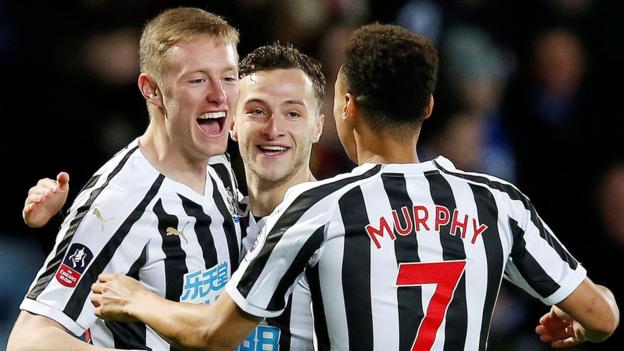 Sean Longstaff scored after a minute for the visitors with a deflected 25-yard shot, before Callum Roberts added the second with a fine volley.

But Adam Armstrong pulled one back from Danny Graham's pass and Darragh Lenihan's powerful header made it 2-2.

In extra time, Joselu scored from a rebound and Ayoze Perez's powerful strike sealed the win for the visitors.

Spanish striker Joselu appeared to be slightly offside for the goal that made it 3-2, as he reacted quickest after Blackburn keeper David Raya had spilled Fabian Schar's long-range shot.

Newcastle's win was their first in seven games in all competitions, since a 1-0 Premier League victory at Huddersfield on 15 December, and they will play Watford at home in the fourth round on 26 January.

It is also only the sixth time they have won an FA Cup tie since Mike Ashley became the owner of the club in 2007.

Victory comes at a cost for Newcastle

With Newcastle 18th in the Premier League, manager Rafael Benitez made it clear that this competition was very much of secondary importance to the club.

Before the game, the Spaniard said: “Who has a realistic chance (of winning the FA Cup)? Teams in the middle of the table because they can have a go because they are safe. The other teams, you have to manage it really carefully.

“The Premier League is massive – you have £130m guaranteed if you are there. You have to be realistic.”

The last thing Benitez would have wanted was this match going to extra time and injuries to key players before Saturday's Premier League game at home to Cardiff, but that is exactly what happened.

Ciaran Clark, one of only three players to remain from the side that started the 2-1 loss at Chelsea on Saturday, went off injured at half-time.

His replacement, club captain Jamaal Lascelles, injured his hamstring within three minutes of the restart, although he remained on the pitch for a further 10 minutes, before he was substituted.

In extra-time, Schar and Isaac Hayden, who replaced Lascelles, were both struggling with injuries for a Newcastle side who are already without defender Paul Dummett and midfielders Mohamed Diame and Jonjo Shelvey.

But Benitez would have been pleased with the fighting spirit from his players and the performances of some of his younger squad members, with 21-year-olds Longstaff and Roberts both scoring their first senior goals.

Newcastle benefited from a bad miss from Blackburn's Bradley Dack in the first half of extra time when he shot wide, and two goals either side of the break gave Benitez's side a hard-fought victory against a team 14th in the Championship.

‘Pleased with the commitment' – what they said

Blackburn manager Tony Mowbray said: “I thought they applied themselves well over the 120 minutes. The goal is offside but we have to accept it.

“Our application and desire was excellent after going two goals down.

“We missed a great chance at 2-2 when Bradley [Dack] slips a shot past the post rather than into the back of the net. It was a great effort from the players, and I feel for them.

“The character and the spirit was there for all to see, but I feel we were let down by the linesman, particularly with the third goal.”

Newcastle manager Rafael Benitez, talking to BT Sport, said: “We went 2-0 up and then Blackburn did well, but we reacted so I'm pleased with the effort and the commitment of the players.

“The young players did well, and the main thing was that everybody was giving 100% for each other and that is what we did.

“The commitment and the team effort is there and you have to be pleased and carry confidence forward when you score four goals. The main thing is to get three points against Cardiff.”

On a potential cup run: “Before this game, with the team selection, we have a squad that are trying to get through, and if we can do it the same way in the next round we will be pleased with that.”

On injuries: “We need to wait tomorrow and see how they are, and if they cannot play then we will bring another one in. Jamaal Lascelles was limping because he felt something.”