Andy Carroll: Magpies striker says he had to Google his Liverpool team-mates 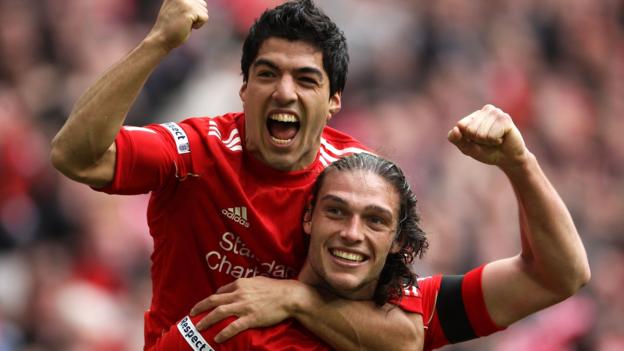 Newcastle striker Andy Carroll has revealed he had to Google who his team-mates were when he joined Liverpool in 2011.

Carroll became the most expensive British footballer of all time when he signed for a club-record £35m.

He joined the Reds on deadline day, joining on the same day Luis Suarez completed a move from Ajax.

“It's bad because it's Liverpool players, but it's not disrespectful,” the 30-year-old told NUFC.co.uk.

“When I was [in Newcastle], I'd go home, mess about with my mates, play football, go out, whatever, but I'd never watch football, I never knew any players.

“When I was in the helicopter down to Liverpool, I was like ‘I know Stevie G, I know Carragher. Who else?' I just literally didn't watch football, so I didn't know.

“My agent at the time had to tell me, and I would get it on Google and find out the team.”

The Magpies forward was signed by then-Liverpool boss Kenny Dalglish, but failed to live up to his price tag at Anfield, scoring only six goals in 44 league games.

The drop in form was a contrast to the 30 goals he scored in his previous two years on Tyneside during which time he also won promotion to the top flight in 2009-10 and had 11 Premier League goals by January in 2010-11 prior to his switch.

However, during his initial stint at St James' Park, Carroll became involved in an number of off-pitch incidents.

In 2009, he was accused of smashing a glass in a man's face during a fight in a Newcastle nightclub. He later pleaded guilty to a charge of common assault and was fined £1000.

“I was a kid. I came out of school, I was messing around here. I never really grew up,” he said.

“I was stupid, I was young, and I was carried away with the lifestyle that I had.

“I'm still a child at heart, but I've grown up massively. I've realised my mistakes in the past, and I've realised what I want to be, and what I am.

“I met my missus, and we've got four kids living at home now, we've got animals, we've got responsibilities. There's no more behaviour like it was.

“Now it's completely different. I'm actually a dad, I've grown up, and got responsibilities, so I've got a purpose.”

In the 2012-13 season, Carroll was loaned to West Ham before making a permanent switch to the Hammers the following season, scoring 34 goals in 142 appearances.

He re-signed for the Magpies on transfer deadline day this year despite being sidelined following ankle surgery and is currently undertaking two training sessions per day as he prepares for his second Magpies debut.