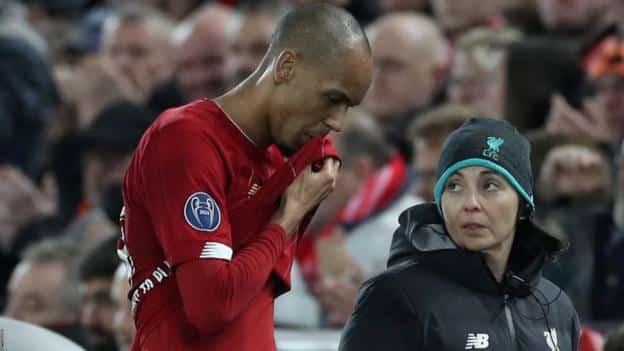 Liverpool playing without their stalwart Virgil Van Djik, came back with a slender 0-1 win at Amsterdam thanks to an own goal by Ajax left-back Nicolas Tagliafico.

The Reds also went in to the Wednesday night’s  clash without Joel Matip at the back and Adrian substituting for first choice custodian Alisson.

Makeshift centre-back Fabinho coming in place of the injured Van Djik didn’t put a foot wrong as he dropped into the back four alongside Joe Gomez for some splendid rearguard defensive action.

The Brazilian brilliantly denied Dusan Tadic on the line with an acrobatic clearance before the break.

Ajax went close near the half-hour mark when Davy Klaassen steamed down the right flank to find Quincy Promes in the area who after some deft interplay with David Neres found himself one-on-one with Adrian but the Spanish custodian reacted sharply to save a certain goal.

It was one of several chances for Ajax in the first half, as Lisandro Martinez had a header saved by Adrian and Ryan Gravenberch shot narrowly wide.

But it were the visitors who took the lead 35 minutes into the game when Sadio Mane turned and dribbled into the box and delivered a shot which rival defender Tagliafico deflected past his own goalkeeper Andre Onana.

The visitors had a fortuitous escape when Klaassen’s powerful effort bounced off the inside of the post and rolled out.

Liverpool goalkeeper Adrian was kept busy as he made crucial saves from a couple of Quincy Promes strikes. Tagliafico was then allowed space to turn and feed Ryan Gravenberch whose low shot from 20 yards whistled past the near post.

Ajax searching desperately for an equalizer, were nearly caught on the break when Andrew Robertson’s 50-yard dash along the flank found Mohammmad Salah whose goalbound shot was blocked by Noussair Mazraoui with goalie Onana completely out of place.

Klopp suddenly replaced Mohamed Salah, Roberto Firmino and Mane on the hour with Takumi Minamino, Diogo Jota and Xherdan Shaqiri in what seemed like a pre-planned move.

The substitutes made a good start with Jota cutting in from the left and forcing a corner and then putting pressure on Onana by chasing the goalie off his line and forcing an error.

Minamino came close to getting the visitors’ second when he fired the ball across the face of goal but Andy Robertson was unable to slide in to score from close-range.

Ajax threw their players forward towards the end and could have equalized 4 minutes into stoppage time when Adrian fumbled a cross into the area but substitute Jurgen Ekkelenkamp made a made mess as he failed to keep his effort down.

The Reds hung on as they left Amsterdam with 3 valuable points and much of it they can owe to Fabinho’s performance for the night.

It was thanks to his alertness in making a pivotal clearance off his own goal-line from Dusan Tadic’s effort that helped his side keep a clean sheet.

Man of the match: Fabinho