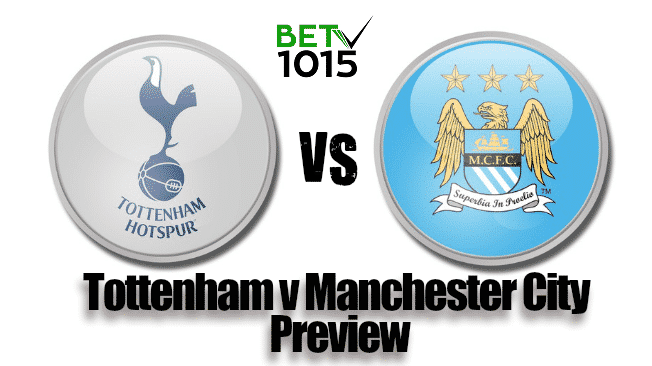 Old rivals Pep Guardiola and Jose Mourinho run into each other again when Tottenham Hotspur welcome Manchester City to North London for a Premier League clash on Saturday. Guardiola will be eager to mark the weekend with success having inked a two-year deal at the Etihad on Thursday.

It's rarely that Spurs have gone into a clash with City in a superior position on the points table and a victory on Saturday would take them to the top. The London outfit are currently on the 2nd spot with 17 points, 5 clear of 10th placed City.

After commencing the season with a 0-1 loss to Everton at home, Spurs have gone unbeaten through their next 7 Premier League fixtures, winning 5 of them and their last three on the trot.

Guardiola's men have had one of the worst starts to a EPL season marked by a 2-5 mauling to Leicester City at the Etihad in their second outing. Their following five games have been punctuated with three draws and just two wins, leaving them struggling at the bottom of the top-half.

City's chances could be boosted by the return of Sergio Aguero who had been struggling with a nagging hamstring injury. The international break has seen City taking a couple of key casualties with Raheem Sterling picking up a calf injury in England's training session and center-back Nathan Ake sustaining a hamstring injury with the Netherlands.

Benjamin Mendy and Fernandinho have also returned to full fitness during the international break and could in all likelihood make it to the starting lineup.

There could be doubts surrounding Oleksandr Zinchenko, who was part of the Ukraine squad and placed under quarantine by the Swiss authorities after a positive test. Gabriel Jesus is now fit and firing ahead of Saturday's game having been involved in 11 goals in his last 11 games and is in line to score in four consecutive Man City appearances for the first time since April 2018.

Spurs, will have to do without Matt Doherty, the ex-Wolves right-back having tested positive for coronavirus while away on international duty with Republic of Ireland.

Doherty came into close contact with clubmate Gareth Bale during a match between Ireland and Wales, but the Real Madrid loanee has not tested positive himself and so is available for the clash with City.

Steven Bergwijn who was declared unfit for Netherlands duty in the Nations League, is hopeful that he will be in contention for November 21st's game. Erik Lanela and Tanguy Ndombele are close to returns having recovered from foot injuries.

Jose Mourinho will be as usual looking to Harry Kane to deliver the goods – the 24-year old English striker has been involved in 23 goals from just 14 games across all competitions this season, eight more than his closest Premier League rival, teammate Son Heung-min.

City may have found an answer to an “on-and-off” Aguero in 20-year old English forward Phil Foden who performed brilliantly in his country's 4-0 win over Iceland on Wednesday night. Along with another exceptional performer in the form of Ferran Torres, scorer of a hat-trick in Spain's sensational 6-0 win over Germany, Foden and Jesus could give the Spurs defense a really hard time.

Historically, both teams look evenly balanced with City winning 6 of the 13 contests between the two since 2015 and Tottenham winning five. City's last trip to the Tottenham stadium in February this year had ended in 0-2 defeat.

With attacking riches on both sides, Saturday evening's clash at London is expected to be a cracker with goals coming at either end. Bookmakers are wagering on City to take three points but don't rule out a win for hosts what with scorers like Kane, Son and Bale charging upfront.

Both Teams to Score