Roy Hodgson will have a big job on his hands when Arsenal cross into South London for their Premier League clash with Crystal Palace at Selhurt Park.

The Gunners are overwhelming favourites to head back to North London with all three points with their odds of victory priced up by the William Hill traders at 88/100 in the betting.

Crystal Palace meanwhile bet at 14/5 for the win whilst the odds of a draw are figured at 29/20.

Our Crystal Palace vs Arsenal predictions foresees one thing and one thing only – another comfortable win for Unai Emery's boys.

Their 3-1 victory over Leicester on Monday night was meant the Gunners extended their Premier League winning streak to seven games and stretched their run to 10 consecutive wins in all competitions.

Mesut Ozil was the star of the show and his impressed performance was the catalyst for victory after a poor first half saw them go behind.

But as has been the case – much to the perplexing of the statisticians – Arsenal defied the numbers once again to take all three points.

The Eagles meanwhile succumbed to their third Premier League defeat in a row, conceding twice in the final three minutes against Everton. Poor form has seen them slide down the table to 15th position and Hodgson knows he will have to arrest that slide to avoid his side falling into the relegation zone.

Neither can he continue to pin all his hopes on Wilfried Zaha after Luka Milivojevic missed a crucial penalty against Everton. 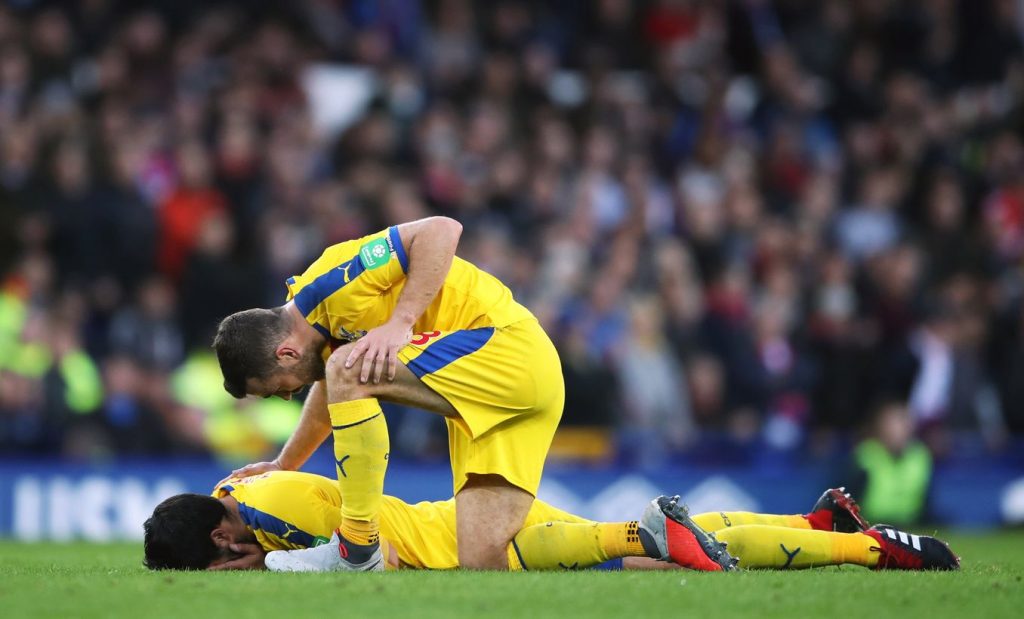 Crystal Palace are sliding dangerously down the Premier League table

Read our Football Betting tips and predictions for this weekend's action.

Something that has defied the statisticians has been the way Arsenal have incredulously started their games poorly before flicking on the switch in the second half.

Despite looking soft, vulnerable and laggy, Arsenal have repeatedly bounced back in the second half to win games.

Incredibly, you would've seen a return on a draw half-time and Arsenal win full-time bet in all of Arsenal's past seven Premier League games.

Whether that be a tactical decision made by Unai Emery to wear out the opposition in the first half and then attempt to capitalise in the second half remains to be seen but for now – the Emirates faithful simply cannot argue with their results.

We might be projecting a comfortable win in our Crystal Palace vs Arsenal predictions but that's only after a classical tame first half before a predictable resurgence in the second half.

And at odds of 4/1, you can't argue with the reasoning or value.

Why not read our Man United vs Juventus predictions and betting tips?

The second instalment of our Crystal Palace vs Arsenal predictions and betting tips is our safe bet projection which is betting at odds of 13/8.

Our reasoning behind an Arsenal win is clear, they've won so many games on the bounce it's frankly getting ridiculous whilst The Eagles have lost their last three games, managing a total sum of two goals.

In contrast, the Gunners have been firing on all cylinders this season – particularly in recent games where they have amassed 15 strikes in their past five games.

Alexandre Lacazette looked visibly frustrated against Leicester having had his striking/wing partner Pierre Emerick-Aubameyang dropped to the bench.

The Frenchman failed to bring his A-game when isolated and doubled up on at every opportunity. The introduction of Aubameyang changed the course of the game and his two goals not only meant he has now scored more as a substitute than Huddersfield have managed in total this season, but also secured the win for Emery's side.

With 16 goals and 5 assists in his 22 Premier League appearances, the Gabonese international has taken to the English game like a fish into the water.

Our final betting tip in our Crystal Palace vs Arsenal predictions are backing Aubameyang to score two or more goals at odds of 11/2.