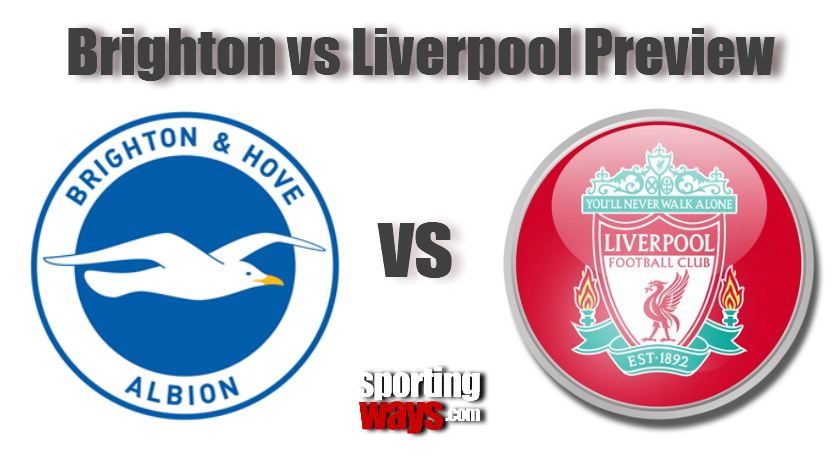 Brighton vs Liverpool predictions and preview for the Premier League match on Saturday 12th January 2019.

As the league leaders you’ll always be in the headlines, no matter how tremendous your season is going, people will say you are going to slip. That is exactly what happened after Liverpool let 3 points slip against Manchester City.

But Liverpool know the pressures of expectation very well, a lot is expected from them and specially because ever since Jurgen Klopp was appointed as a manager, Liverpool have grown and been on a journey to build the squad that wins titles.

So far they have been unsuccessful in claiming a title under Jurgen Klopp but the manner in which they fight has impressed and many think that it’s only a matter of time when they win a big trophy.

Liverpool saw their undefeated start to the Premier League campaign halted by Manchester City at the Etihad in a 2-1 loss. There were many talking points from that game that could’ve potentially altered the result but Klopp is too good of a manager to dwell on those points, his focus will be on Brighton.

Brighton would be well aware of the qualities that the Liverpool side have as Liverpool defeated them with a goal from Salah, back in August.

For Liverpool there can be no more slipups as Manchester City are lurking around and so too are Tottenham. Liverpool’s full backs will play a key role in their return to winning ways with both Andy Robertson and Trent Alexander-Arnold looking a menace for the oppositions, even in the Manchester City game. Roberto Firminho is another key man for Liverpool who has been back amongst the goals in recent matches.

Brighton and Liverpool have been making headlines of the transfer rumor mills recently, with Liverpool striker, Solanke, who looked set to complete a loan move to Crystal Palace is now seemed to be headed for a permanent deal at Brighton. If the rumors are to believed then Liverpool have a solid interest in signing one of Brighton’s stars, they are believed to be perusing the signature of Pascal Gross who has been long admired by the Liverpool manager, dating back to when Klopp was in charge of Borussia Dortmund and Pascal Gross was playmaker at Ingolstadt.

Overall the match promises to be a great one with both sides having talents that can light up a football game. Both sides have played positive attacking football and that is certainly not going to change for Liverpool who will look to attack Brighton right from kick off. Brighton however may take a much more cautious approach knowing the talents of Liverpool, where Brighton try to counter attack Liverpool.

Both teams have their targets for the season and both would want to get the three points. So on Saturday 12th January at 15:00 BST, don’t miss this one.

Get your Free Football Bonuses below