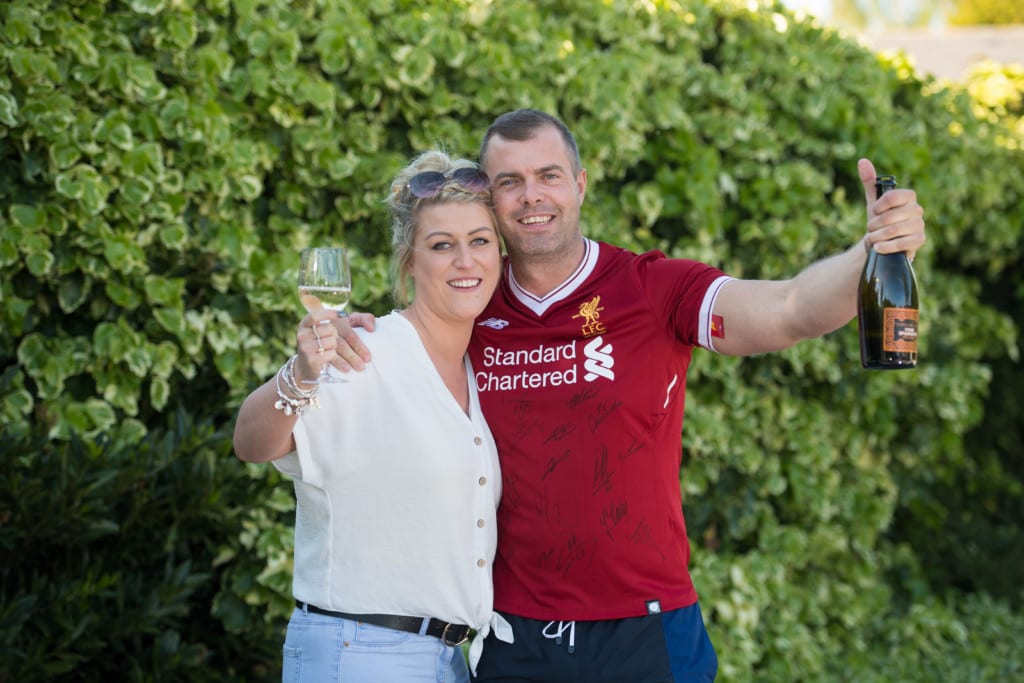 CHOMPIONS League joy for Richy, as he lines up some improved gnashers ….

Life is to get smiles better for a Liverpool fan who has used his footie bet winnings to pay for dazzling new teeth, just like striker Roberto Firmino and charismatic boss Jurgen Klopp (both pictured, below). “I’ve always admired the pearly white smiles of them two as well as Sadio Mane, and now I can afford the cosmetic dental treatment too,” said Richy, aged 33, from Ellesmere Port, Cheshire.

He was in a lucky mood when out celebrating his engagement to care assistant Robyn Threadgold (above, with Richy), and decided to bet on his beloved Liverpool overcoming a 3-0 Champions League semi-final first leg deficit to beat heavily-fancied Messi’s Barcelona to reach the final against Spurs on June 1 in Madrid. The Betfred shop at Williamson Square in Liverpool city centre had Liverpool to win 4-0 at 50/1 – but super confident Richy went one better and slapped £20 on that scoreline AND back-up striker Divock Origi to score first which was available at 200/1.

Jubilant Richy said: “To say I celebrated winning £4,000, my biggest win ever, from just a £20 bet would  be an understatement. Let’s just say I got home next morning at 7.30 and Robyn wasn’t too impressed – although like me she is made up once she knew how much I’d won!”

Within 48 hours Richy has done his research and booked a holiday in Turkey, where he will have the veneers fitted at a cost of £3,200 on Friday.

Richy went on: “I met Robyn on a dating website 18 months ago and since then we’ve moved in together and have a beautiful ten-week old baby daughter Ellie. So to win £4,000 and me to get a Firmino smile is a great hat-trick! I do consider myself a very, very lucky person even winning a signed Liverpool shirt at a charity event not so long ago. “I’ve been a Liverpool fan all my life and when I was playing for Kirkby and then Knowsley Boys dreamt about playing for them. My mates were laughing their heads off when I told them about my bet but I was sure Liverpool could get to the final even against a great team like Barcelona. With my favourite player Mo Salah and also Firmino injured I just thought Origi was due a goal.

“After he scored early everyone could hear us cheering in the bar and word soon got around that I would be winning big if it ended up four nil to us. I just can’t believe I’m getting the Liverpool smile AND a week in Turkey for just a £20 bet.”

One of Richy’s pals Lucas Street had flown from Perth, Australia for the engagement party. The 30 year old scaffolder said:  “It was always going to be a memorable night out but for him to win £4,000 on such a crazy bet is incredible. He’s one  of the few Liverpool fans smiling at all after losing out in the Premier League title race to Manchester City.”

Robyn, who marries Richy in October, added: “It’s his money, so if he wants new front teeth that’s up to him. To be honest I’m just glad to be getting away for some sun and the chance to relax, especially as I have never been abroad before. It has been great since we met. I’m still in a daze.”

Betfred boss Fred Done said: “In more than fifty years as a bookie I have never heard of any of our winners splashing out on new gnashers. We’ve had lucky customers spending their winnings on unusual things like a parrot, canoe and even a funeral payment plan but never one who wanted to treat himself to a nice smile.

Still, he’s from Cheshire – so like the saying goes he can now afford to grin like a Cheshire cat!”